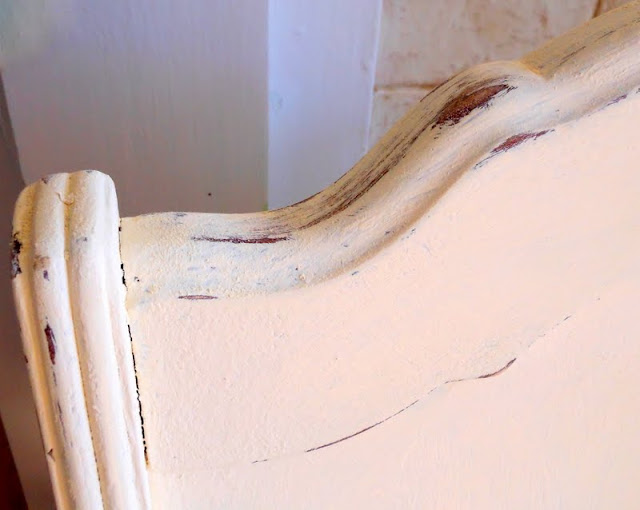 I realized something about myself today.
I already knew it, I just didn't know how
hard core I am about it. Blogging is so good for that. I found this great chair for three bucks.
It has nice details - carved legs,
a lovely arched design on top of the back,
and the perfect place to put a design. 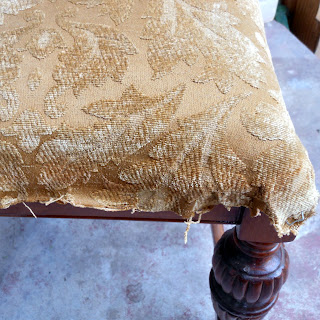 I started thinking about what I might do
the minute I put her in the car. 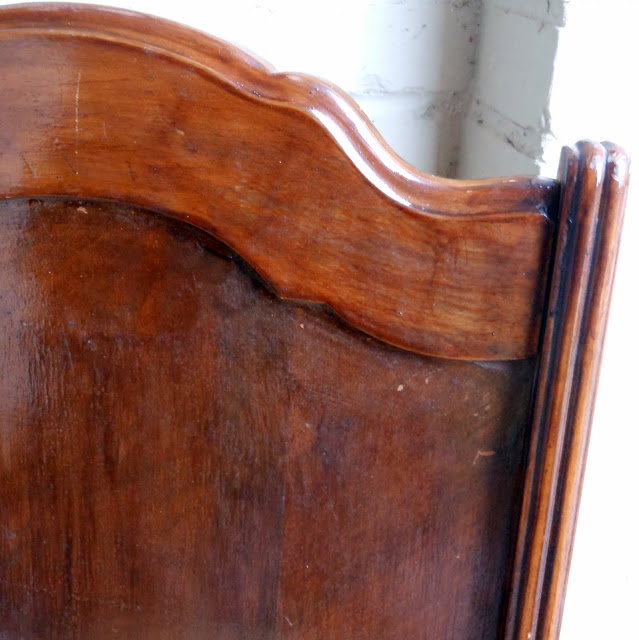 A number? Which one? I already have a 7.
A graphic from the Graphic Fairy?
What kind? A French label? Something
industrial looking? Vintage? Choices, choices.

Then, I had a great idea!
An ampersand. You know - the "and" sign.
&
I found a lovely font and enlarged it.
I even looked up the history of the ampersand.
It's quite interesting. And it's French.
"Perfect," I thought.

And I even went so far as to name this chair.
Annie.
Annie would be a new companion to Martha.

It made perfect sense. She has a new
coat of Annie Sloan Old White on her.
And she'll soon have an ampersand on her back. 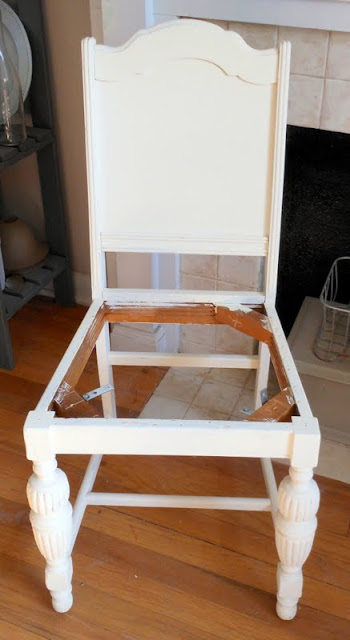 So I taped the ampersand on the chair,
to try and find the perfect placement.
I wanted it visually centered in the space.
When I stepped back to look at the placement,
I hated it. 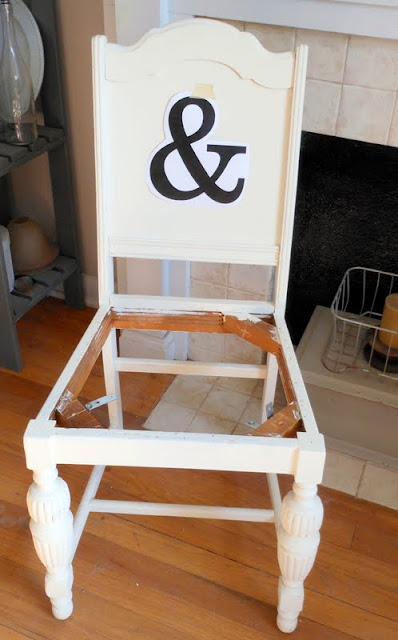 Well, hate may be too strong a word.
It didn't feel right. So I took it off.

And I gently distressed her
to show off her curves. 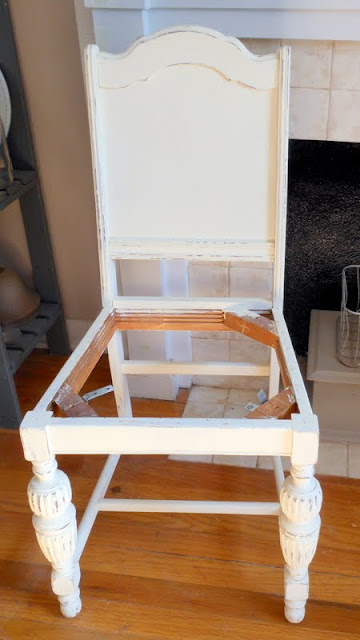 Did you notice those legs? 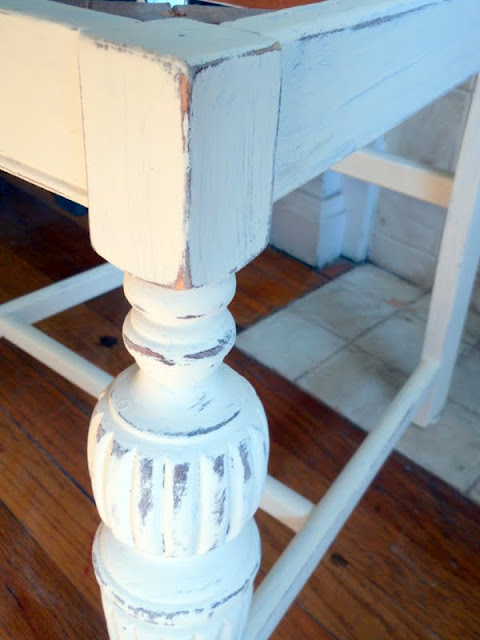 As I sanded, I kept wondering what else I might
put in the center of that virtual blank canvas.

And I drew a blank. 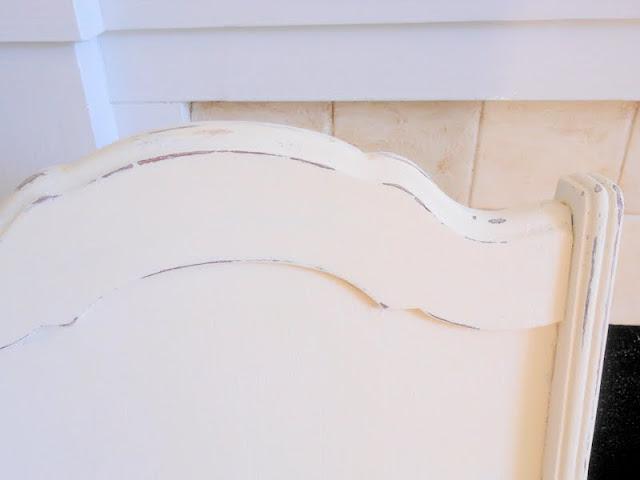 If not the chair back,
then what about the seat cover?
A patterned fabric?
A transfer on canvas? 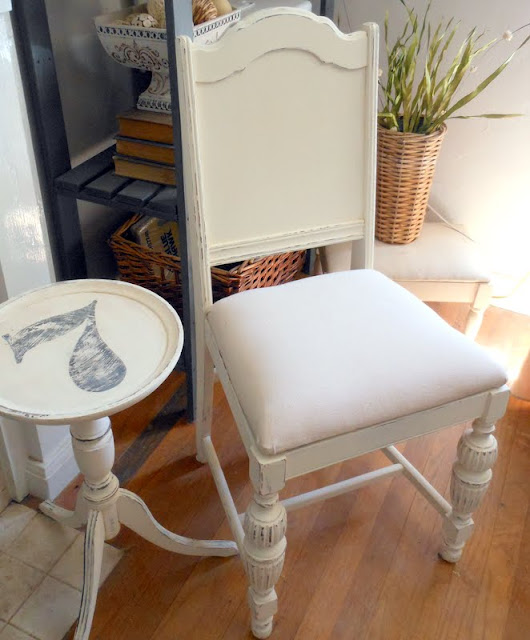 Sorry.
If I have disappointed any of you
who wanted to see a number or graphic,
please forgive me. 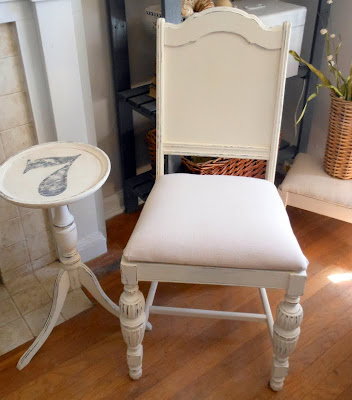 I just like plain stuff. At least the BIG stuff.
Walls and furniture - I like them plain. 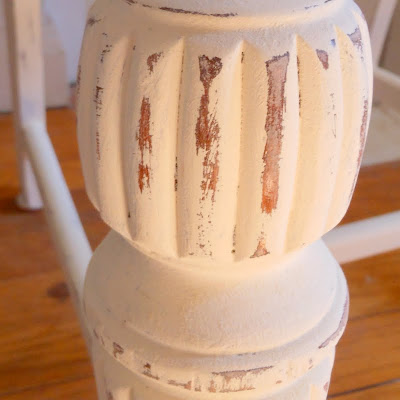 I don't think I have problems with commitment,
it's just that I like to change things around a lot.
And plain things allow me to do that with the
least amount of work possible.

But back to the new girl...Annie or Jane?
Martha is just dying to know. Let me know
what name you think I should call her...

Word for the Day:
Philippians 2:8-11
8 And being found in human form,
he humbled himself by becoming obedient
to the point of death, even death on a cross.
9  Therefore God has highly exalted him
and bestowed on him the name
that is above every name, 10 so that
at the name of Jesus every knee should bow,
in heaven and on earth and under the earth,
11 and every tongue confess that Jesus Christ
is Lord, to the glory of God the Father.

P.S. About the Ampersand -

From the Hot Word Dictionary:
"The shape of the character (&) predates the word ampersand by more than 1,500 years. In the first century, Roman scribes wrote in cursive, so when they wrote the Latin word et which means “and” they linked the e and t. Over time the combined letters came to signify the word “and” in English as well. Certain versions of the ampersand, like that in the font Caslon, clearly reveal the origin of the shape.

The word “ampersand” came many years later when “&” was actually part of the English alphabet. In the early 1800s, school children reciting their ABCs concluded the alphabet with the &. It would have been confusing to say “X, Y, Z, and.” Rather, the students said, “and per se and.” “Per se” means “by itself,” so the students were essentially saying, “X, Y, Z, and by itself and.” Over time, “and per se and” was slurred together into the word we use today: ampersand."

If anything, I'd give her a number 8! Or something more delciate, like an image, but less bold. You did a great job on the chair... I just love old chairs. You can't beat them. None of this mdf stuff for me...give me a girl with turned legs any day!

I think it looks beautiful just the way it is! You did an great job! Just went to an auction today and brought home another chair...my husband just keeps stacking them up in the garage until I can get to them all. I just can't resist!

Something Nice and Pretty said...

I love it just the way it is! The old white looks awesome and the chair looks great next to the # table!

You made a good choice for this chair. Sometimes less is more and that chair has such wonderful detail already. Good job :)

she looks like a jane, revi:) and she's lovely as is...your style!

Sometimes, like Popeye, you just have to say, I yam what I yam. So you did. It's beautiful in it's own new lovely creamy way.
Liz

Sometimes less IS more:) I love it in all its simplicity!Lovely!

I like Annie, it's simple but classic like the chair. I loved all the history about the ampersand. I am one of your newer followers and enjoy how your quotes relate to your posts and everyday life.

I, too, think it's lovely just the way it is, simple and sweet. Anything else would take away from the chair's curves and legs....great re-do.
Take care - Sonnie

I actually LOVE it plain. I am definately of the "less is more" variety too - hated the & symbol there too, so you aren't wrong!

The one thing I do see as a possibily on the back is maybe gluing burlap cut to that exact back shape? Or possibly gluing/wrapping it around a very thin board then putting it on? That could be some "texture" it needs - but again it looks great plain - nothing a little throw pillow can't make better.

Well done, it's a beauty!

My first ever chairs were similar to this and I did them plain too. You may remember them, with the stripes on the seat. I couldn't visualize anything too much for them as I thought they'd end up too busy. Mind you they haven't sold yet!
Yours is just gorgeous as it is Revi!! Great job!

This chair is not plain looking - it is elegant.

i love it as is, too- it is simple and sweet and lets the chairs own details really shine.

We love what we love & that, in the end, is what makes our homes OURS. Your chair is beautiful just the way she is, you did a wonderful job giving her a makeover. Besides, with her sitting next to that adorable table with the #7, it works so well. Oh, and I'm slightly partial to the name Annie. She just looks like an Annie. Beautiful job!

I am like you, I like plain too. I think we really do have a place in this world. I think the chair looks perfect, so I think you should name it, Tammy. Tammy means perfection;) Thank you for linking this up to Rustic Restorations Weekend!

Beautiful chair - the ampersand would have totally worked though I like it both ways!
Thanks for sharing!
Stacey of Embracing Change

I'm a plain & simple girl too. I think the chair looks great. Sometimes less is more. Those gorgeous legs get all of the attention now! Thanks for sharing with air your laundry friday! xo Jami