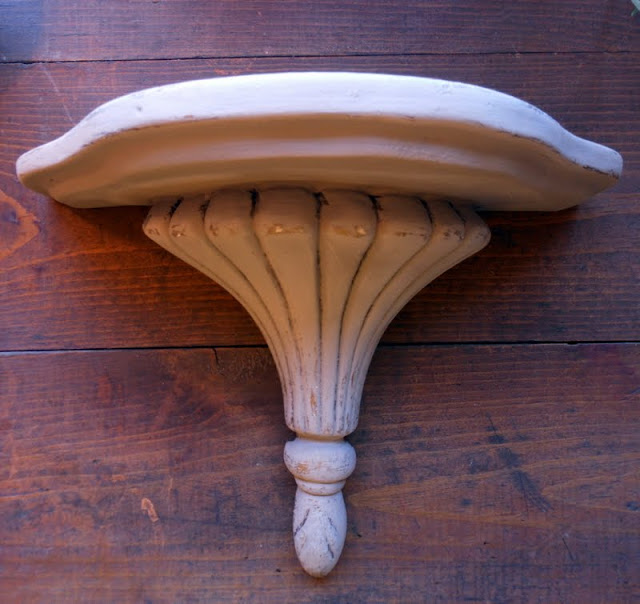 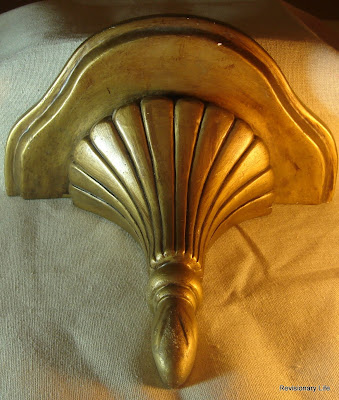 French Linen is a good way to paint over
dated or damaged gold items...full strength
or thinned to allow the gold to shine through. 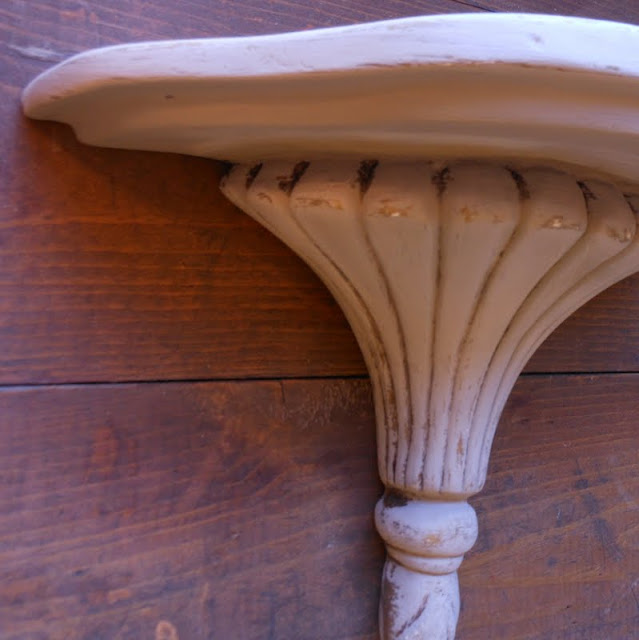 I painted this plaster sconce,
a recipe card box from my friend Mary Gill.
It was yellow, and due for an update. 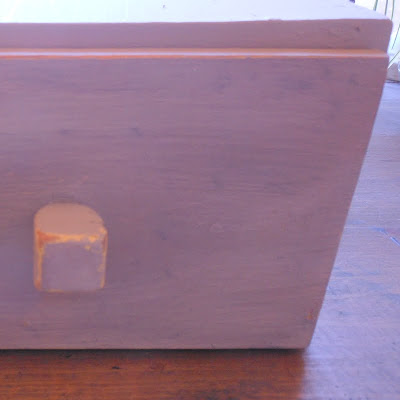 This recent thrift store find is pretty as is... 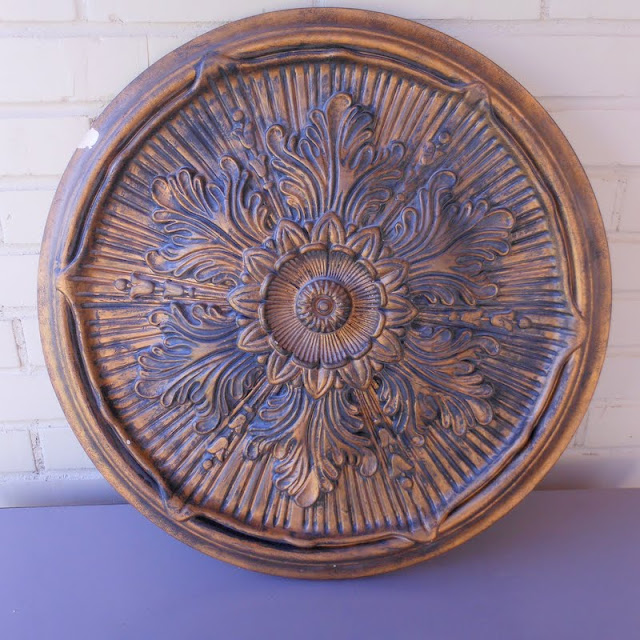 ...but it has some damaged areas. 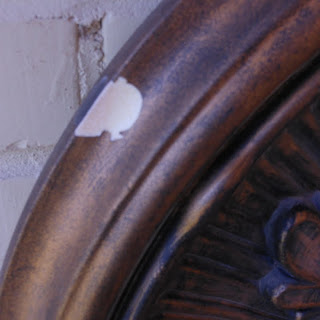 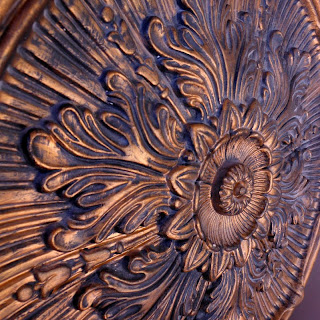 It has received a coat of French Linen... 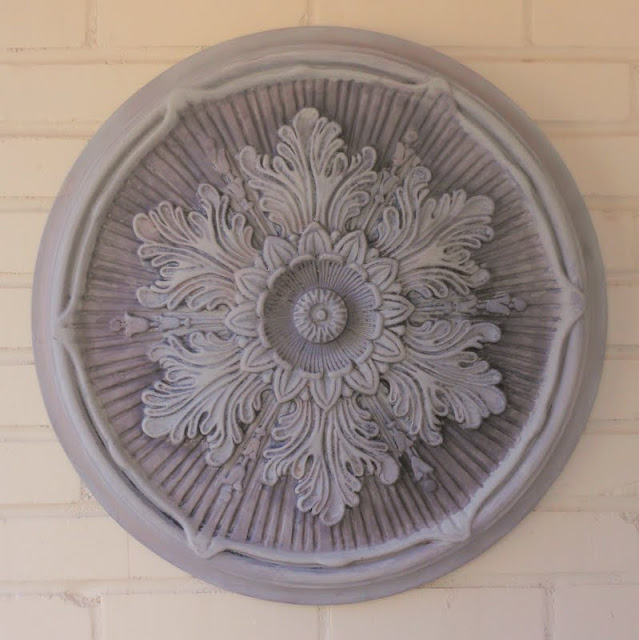 ...but I am not sure if it is quite right yet.
I will probably tweak it with white. 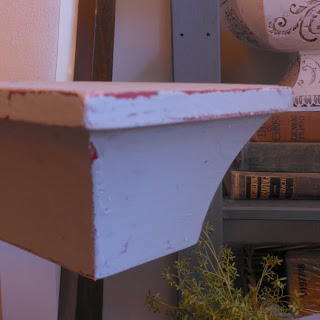 I've had this wall shelf for a while.
I bought it for two dollars at a thrift store.
I'm not sure where it will end up,
but for now, it has a coat of French Linen.

When I start painting,
sometimes it's hard to stop!
But, I am preparing for a garage sale...
painting must wait for now. 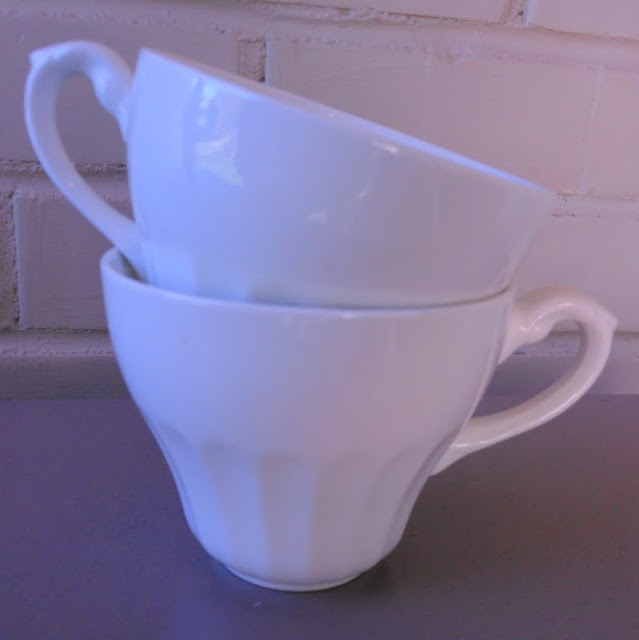 When I first began blogging just over a year ago,
I saw "ironstone" everywhere! 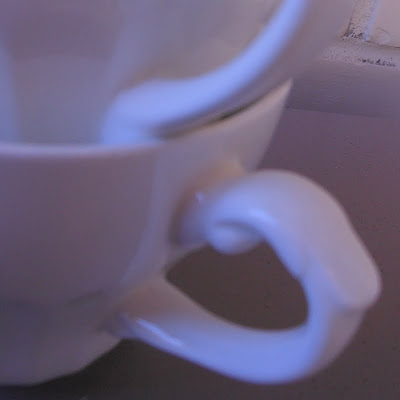 I had collected white dishes for years - decades even.
But was it ironstone? 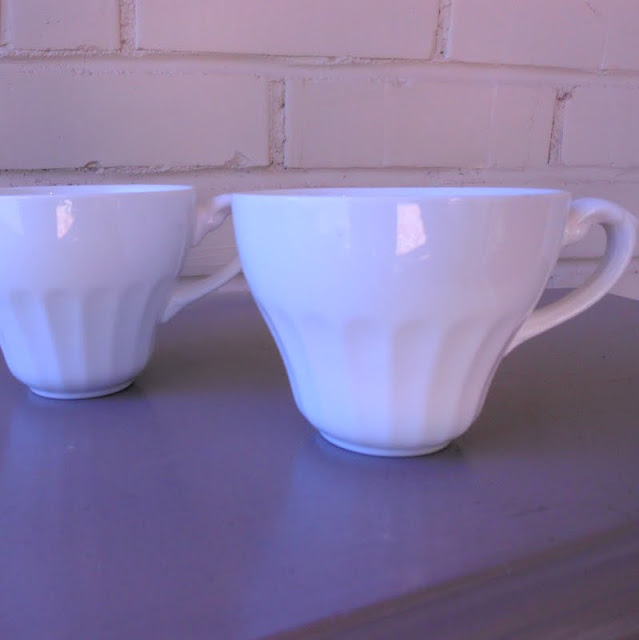 Was there a difference
between my hutch full of mismatched white
ceramic plates, cups and bowls and the
authentic white ironstone I saw in blogs? 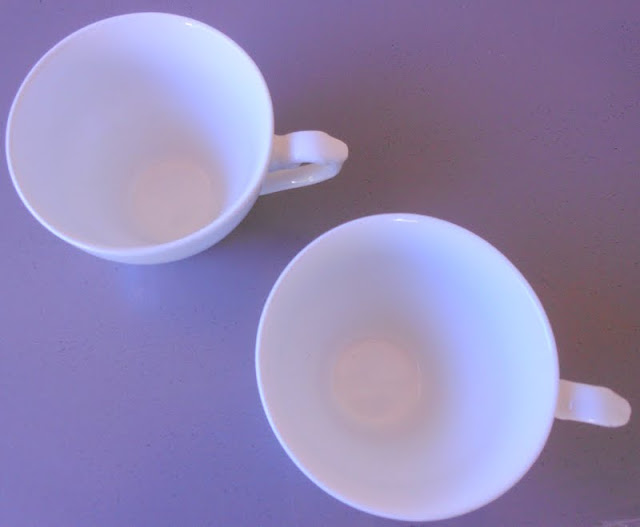 I figured there probably was.
And, I was to embarrassed to admit my ignorance
to ask about it for a while. Then, I felt safe
enough to ask Rosemary at Villa Barnes just
what exactly ironstone was.

"Now, I must risk looking stupid, but I'd like to ask you - what exactly constitutes ironstone? Is it any kind of white non-translucent ceramic piece? I know I've seen lots of it posted and yet when I try to find information, it's not terribly specific. I know it was originally made in England, it's not translucent, it's heavy and durable. Can you tell me anything else?

When I started collecting, it was just white stuff. I don't know if any of it is ironstone or not - I just like it! Anyway, maybe because we're both Christ-followers, I feel safe asking you a stupid question. :)"

And  Rosemary was gracious to me.

"It's not a stupid question.  The difference between ironstone and porcelain is, ironstone literally has iron in it.  Ironstone is definitely heavier, especially the older ones.  I have old ironstone platters that weigh a ton.  Sometimes it will say ironstone on it."
xoxoRosemary

Since then, I've been reading the bottoms of
any English design pieces. I've found
Ironstone from China. Lots of it. I bought some.

But last weekend I actually found two pieces of
English Ironstone from the J and G Meakin. 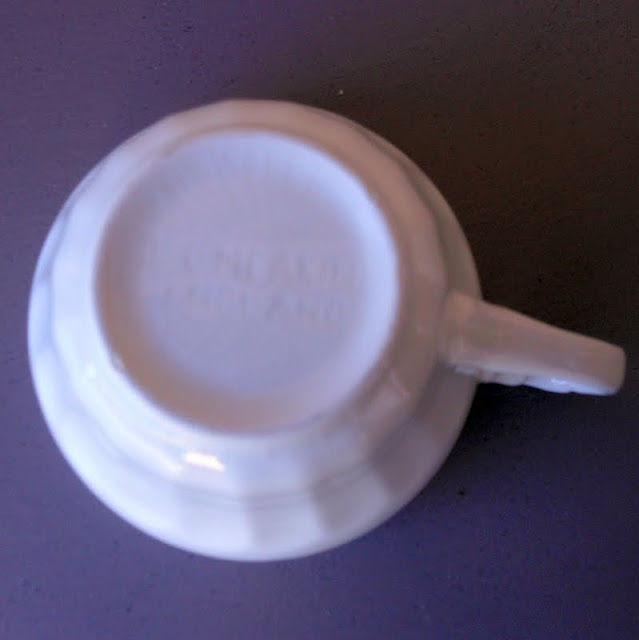 Aren't they pretty?
They're not rare, but they're authentic.
I also found some silver plate flatware. 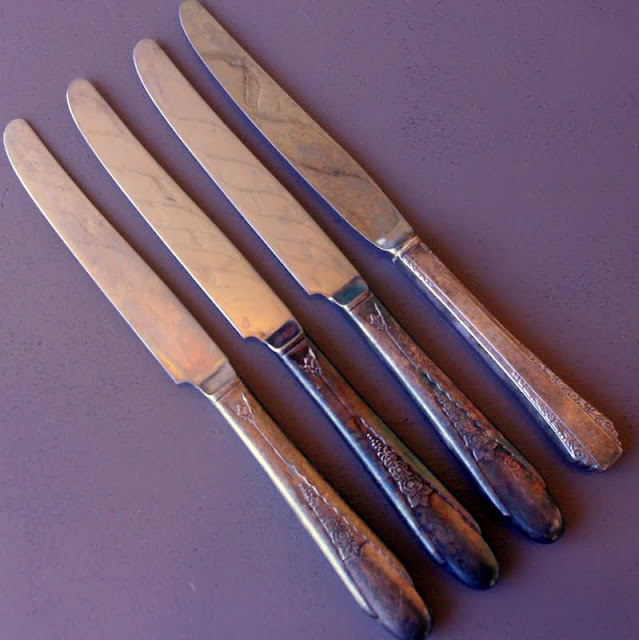 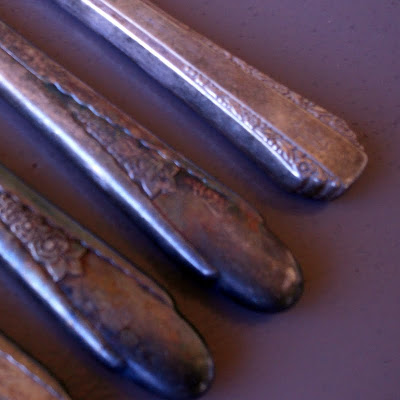 I don't think I'll probably eat with it, 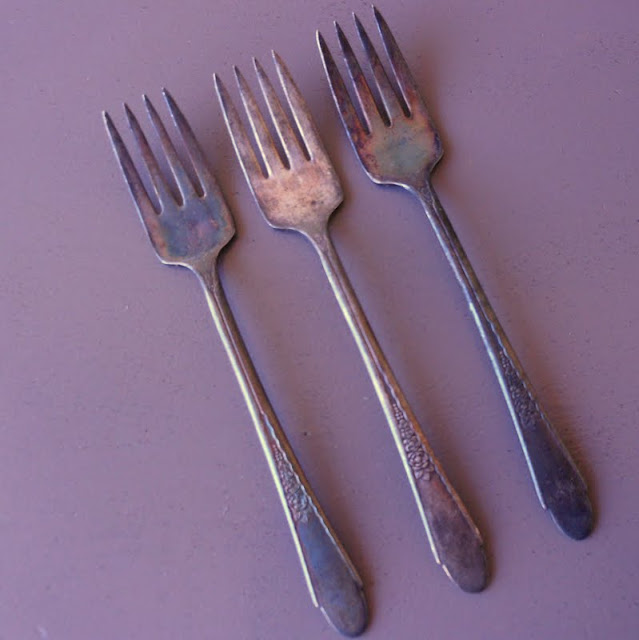 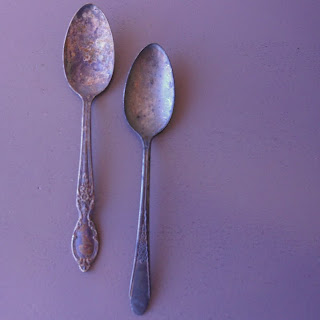 what clever thing might be done with it.
I also found these charming pieces: 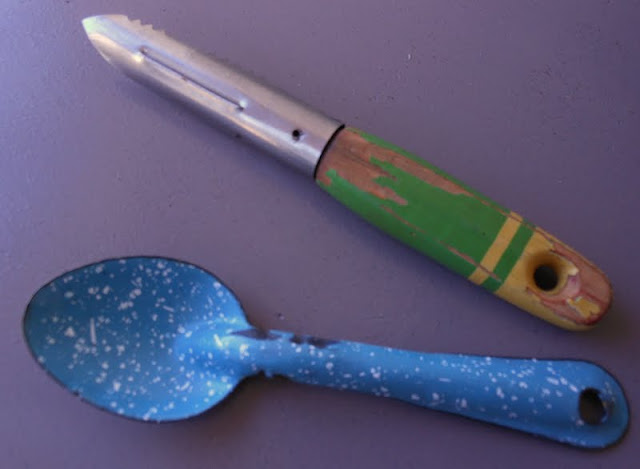 A circa 1940's apple corer with a green wood handle,
and a charming turquoise speckled enamel spoon.

I found decorative items, too.
This fiberglass medallion caught my eye... 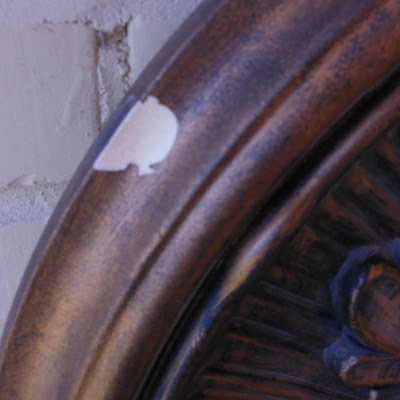 but since I'll paint it anyway, it's not relevant. 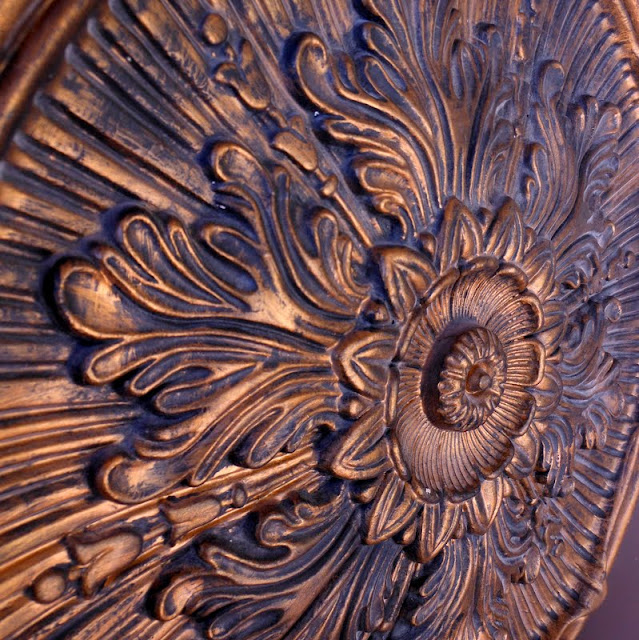 Next time, you'll see how it's changed!
Now, I just have to decide where to put it.

This little lamp shade is nice... 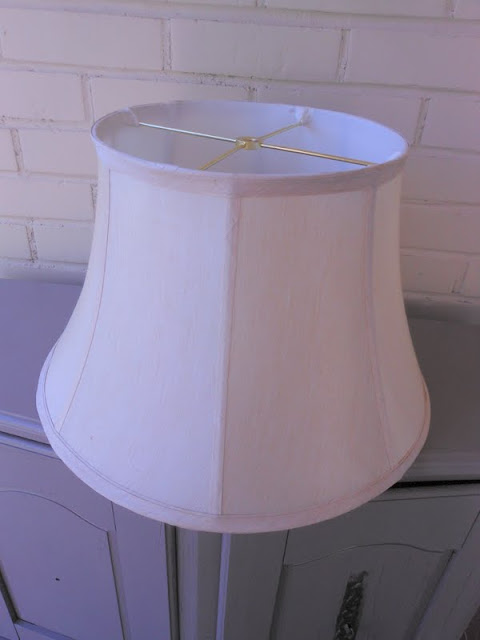 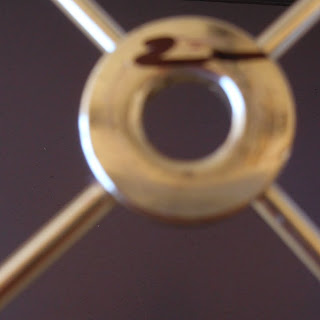 Within the hour, I stopped by Hobby Lobby and found this: 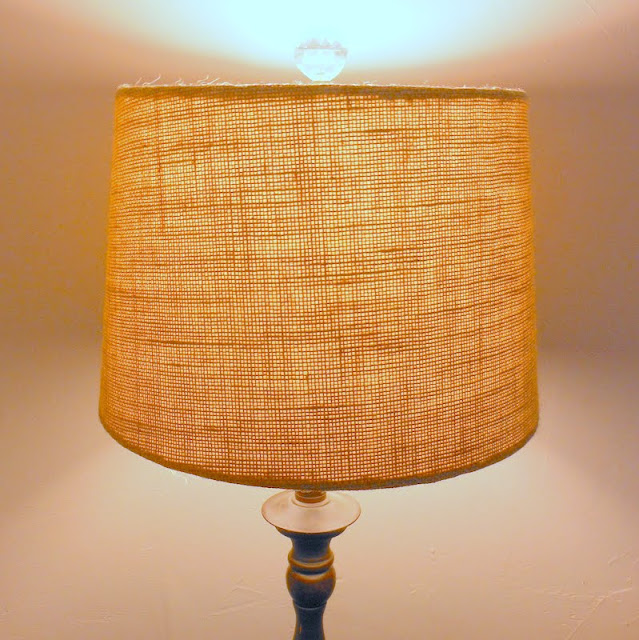 A lovely new burlap lamp shade that fits a lamp
in my living room perfectly! How much? 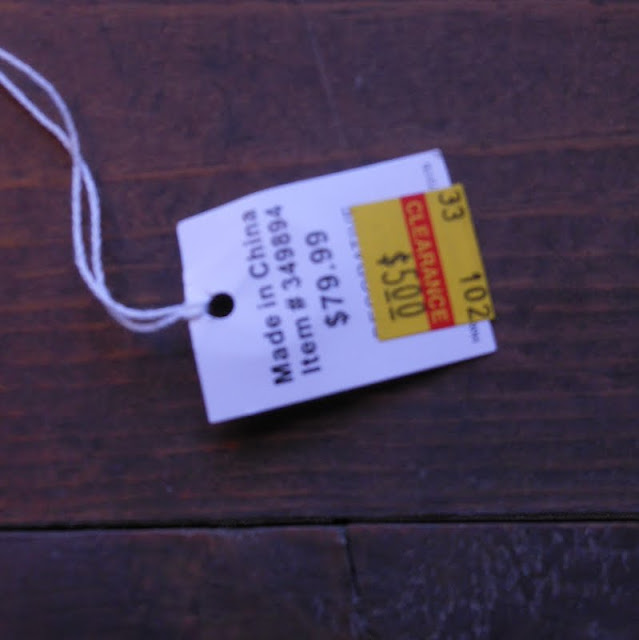 A harp and finial were attached. The lamp probably broke.
(The finial was orange...not the crystal one pictured.)

I was also excited to find these!: 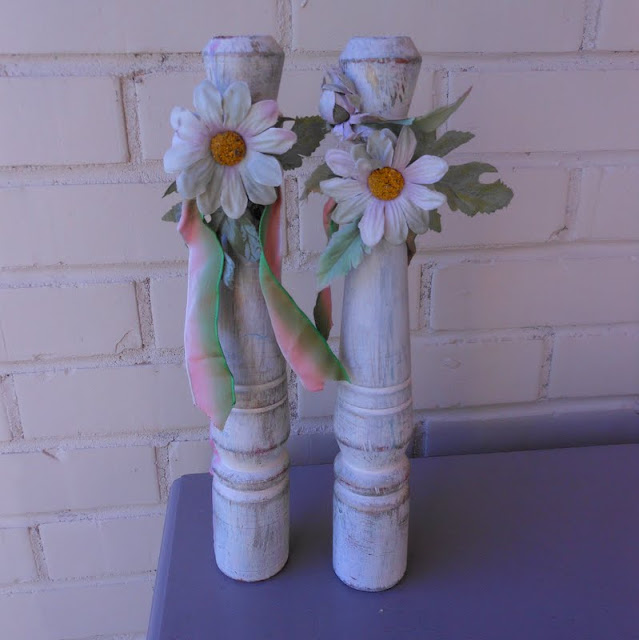 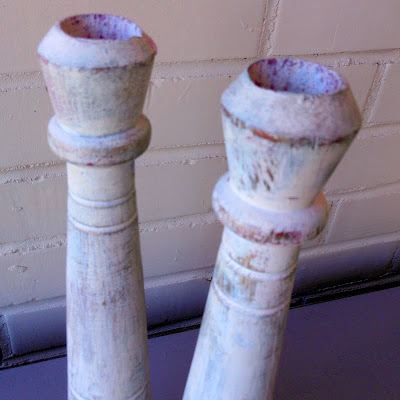 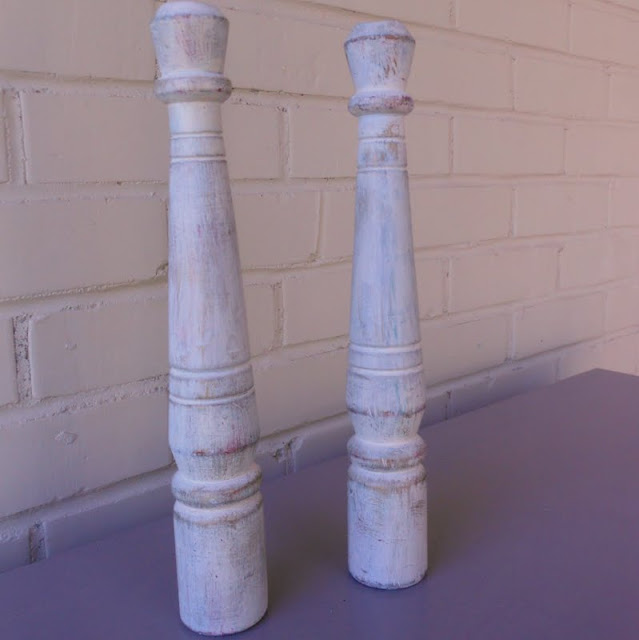 
The man and his wife were both naked,
and they felt no shame.