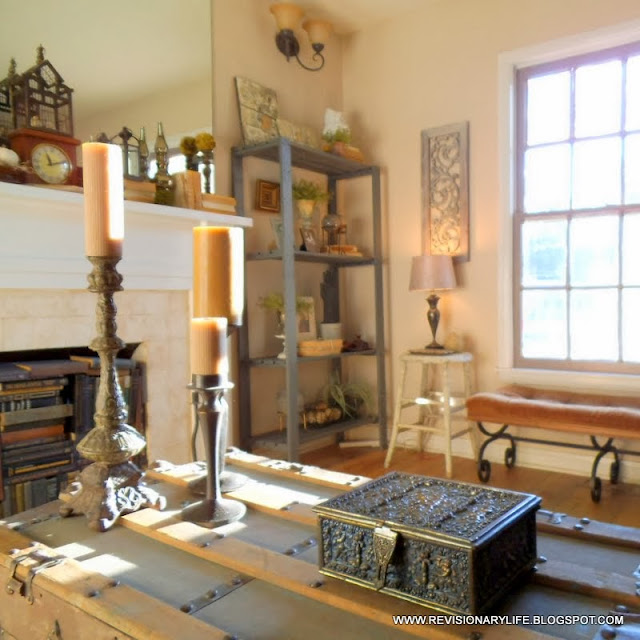 Thursday evening after work, I just had to play around in the living room! Too many seemingly fruitless days spent in the middle bedroom have left me craving some instant gratification. 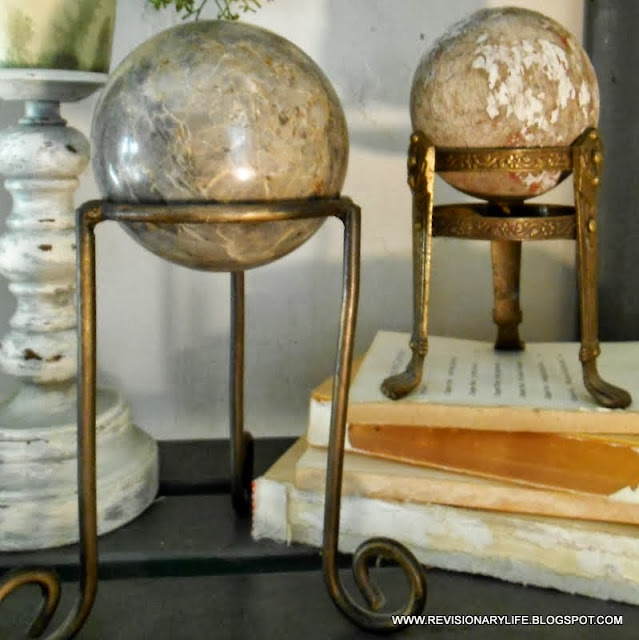 I had already unpacked some rusty things, tarnished metals, and "fallish" things.

The fall mantel started the whole ball rolling. Even though there's at least ONE tweak coming, it changed the feel of the room. I craved more... 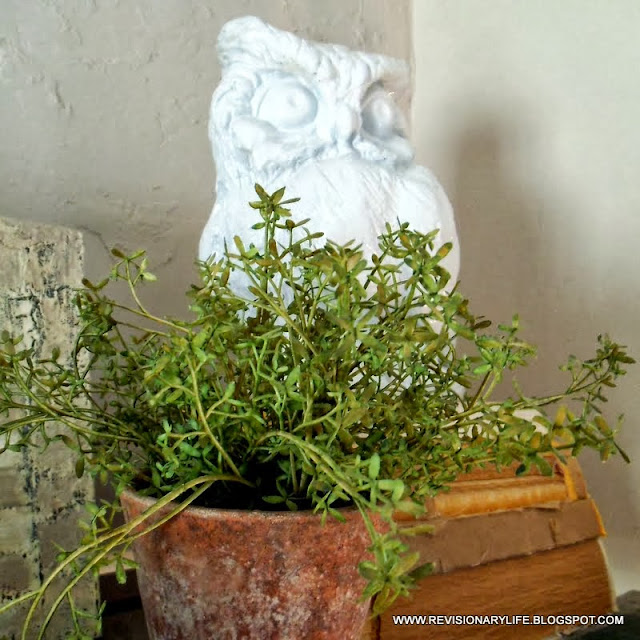 I had intended to use the vintage chalk ware owl I  found last year and spray painted, so he and a pheasant came out of hibernation. 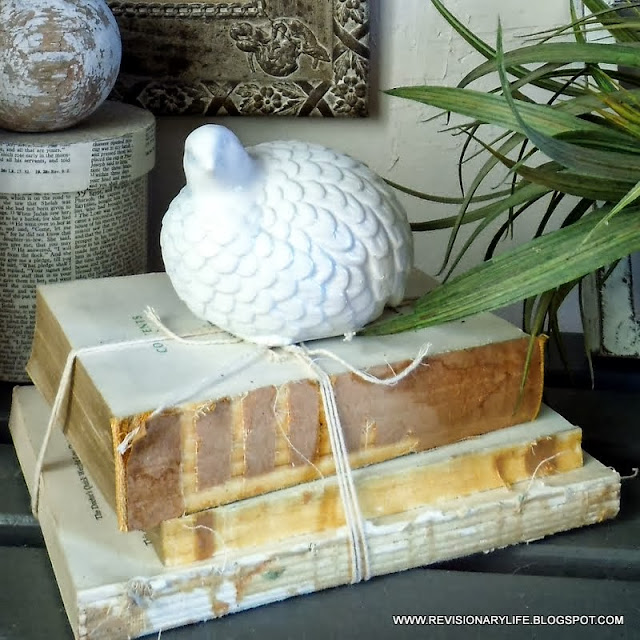 Keeping with my plan to go with more grays and aged whites, they're just a pop of something clean and stark tossed into the salad of industrial, elegant, French, primitive and vintage things that make up my living room.

I enjoyed the mod-vintage theme I had for summer, but packed most of the vases away. I kept some modern art, just for that eclectic vibe. 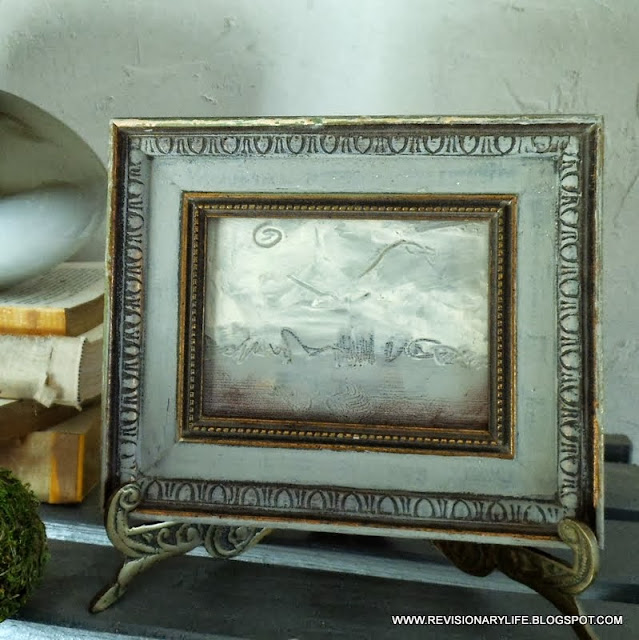 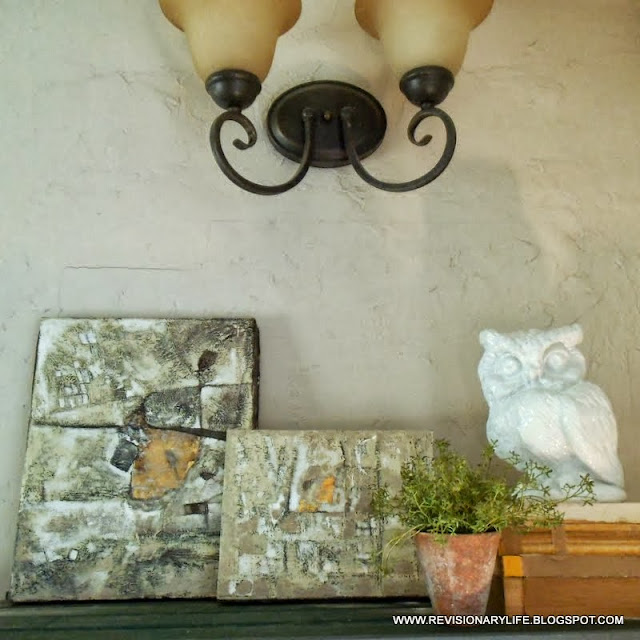 Aside from three contemporary paintings and a glass egg vase, the rest of the mix is pretty much vintage. I did bring back out some vintage industrial elements I had rested during summer. 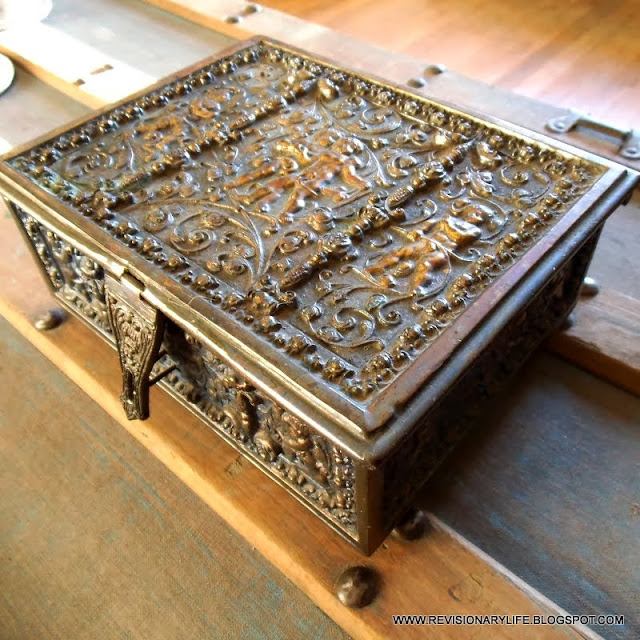 This vintage French box was a gift from my sweet friend Stacey. It weighs a TON. 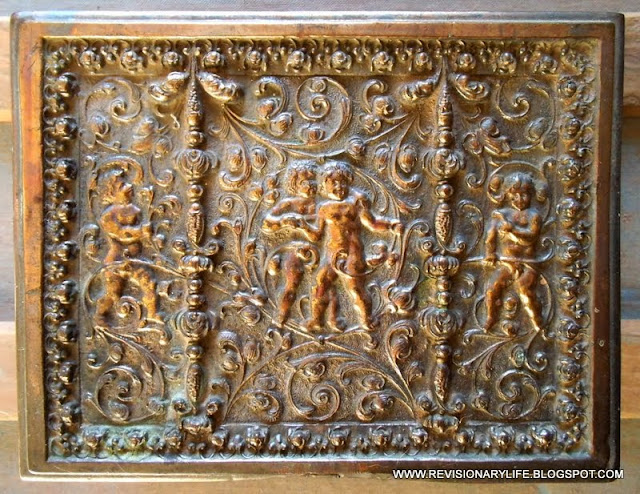 I love it, and it is a special reminder of her and our friendship now that she lives far away. It is so ornate, with the cherubim on it. It reminds me a little bit of the Ark of the Covenant... 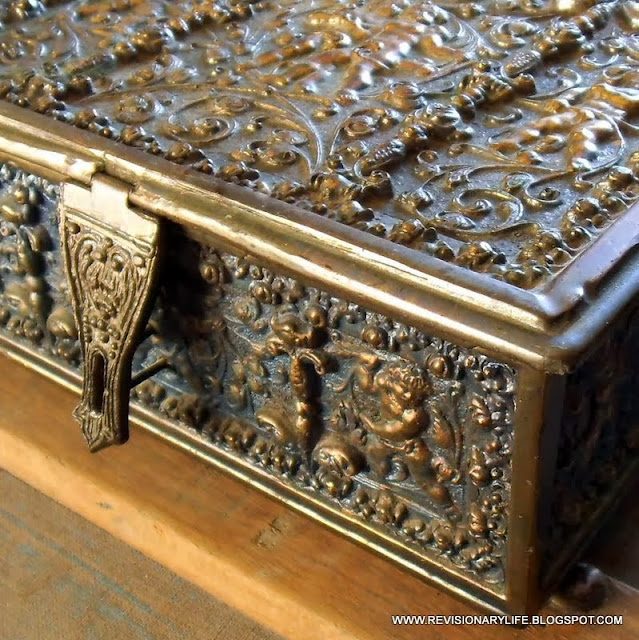 It's keeping company with three different bronze candlesticks on the steamer trunk coffee table. They were all found at thrift stores for a couple of dollars each. 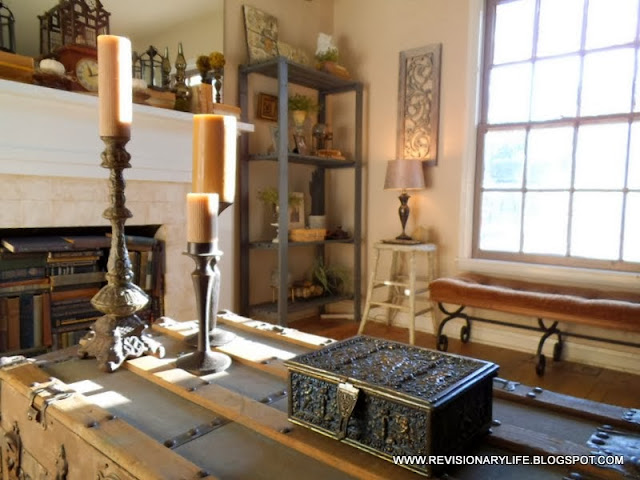 I have never grouped them together until just this week. 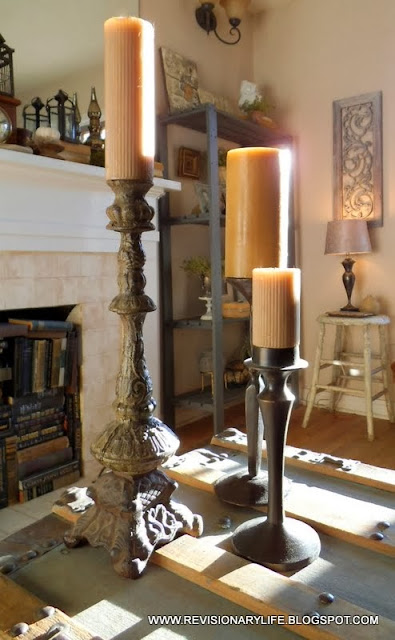 You can see the right shelf on in the background. Here are some shots of the nicer vignettes on the shelf: 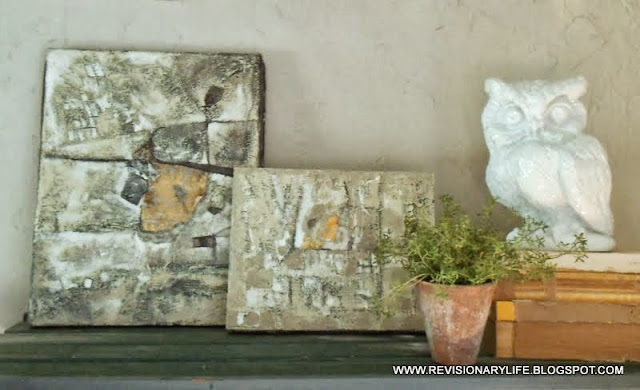 2nd Shelf: Black & white photos of my cute kiddos, a vintage gold framed mirror, a thrifted pot with more of the greenery on a plaster-painted, thrifted candlestick, a stone orb on a thrifted iron stand, a "T" from Hobby Lobby, a vintage croquet ball from Julie's shop from years ago, another thrift store stand and more deconstructed books. 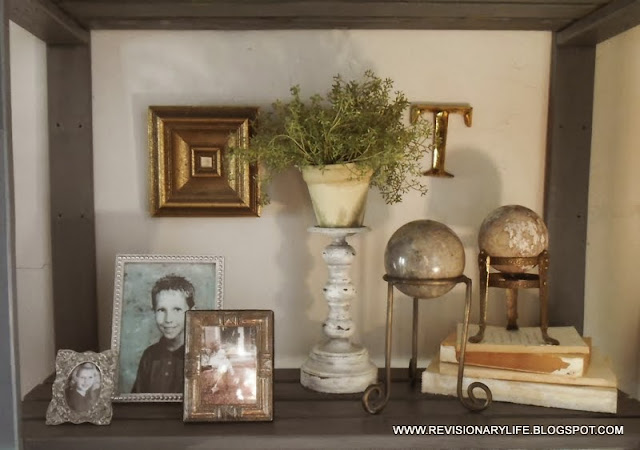 3rd Shelf: A thrifted candlestick painted with ASCP Old White, still more of the deconstructed garland from Hobby Lobby inside a vintage metal sugar bowl, a retail-purchased framed photo of my kiddos, more deconstructed garage sale books, a vintage glove mold hand from a trendy shop near me, sitting on a thrifted box I covered in Bible pages, and two very cool thrifted feet - one is a shoe stretcher and the other is a last for making children's shoes. 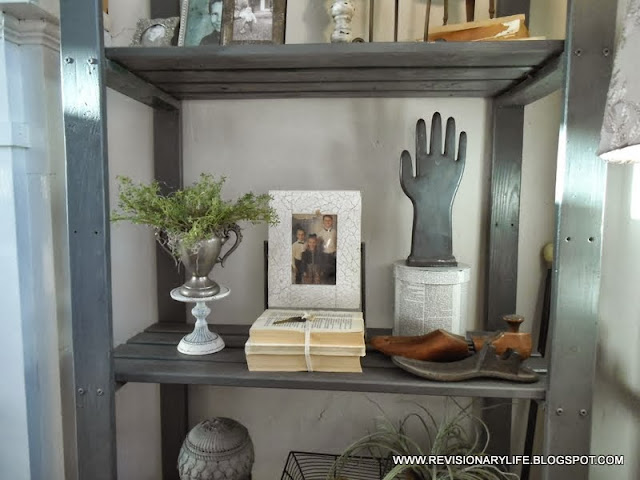 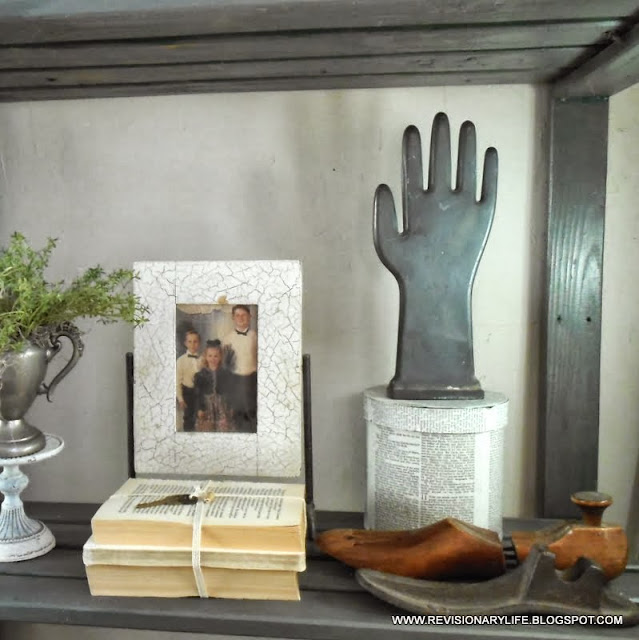 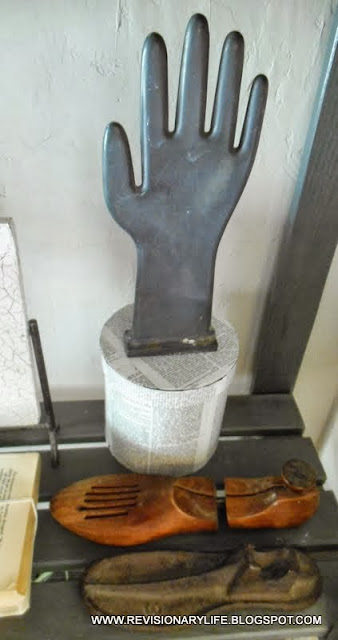 We are his hands and feet right?

The shelf on the left side has more vignettes.

Top Shelf - all the items were purchased at garage sales or thrift stores. I painted the vintage frame, and painted over the boat print on wood inside it. The brass stand supporting the frame is also from a thrift store.The faux greenery is from Dollar Tree, I think. It's years old! I didn't get a good shot of the elegant vase holding it. The mod glass egg was a buck at a garage sale last summer. The moss ball was from Hobby Lobby. 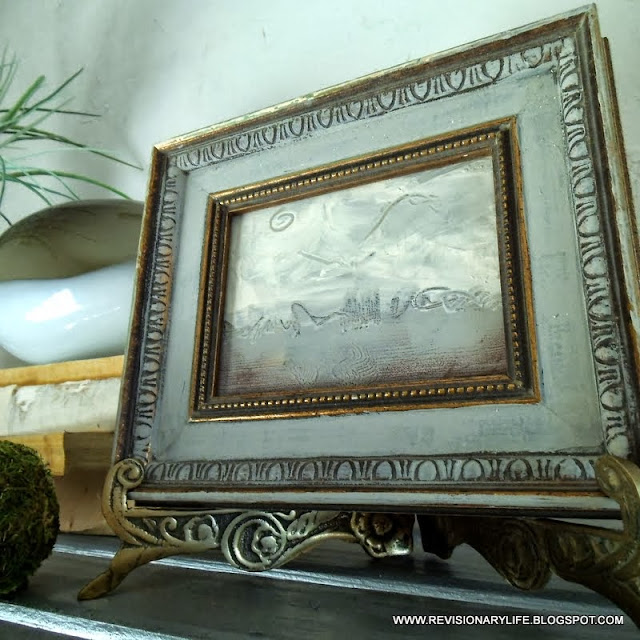 2nd Shelf: A moss ball from HL, a metal orb from a garage sale on a thrift store iron stand, and a child's croquet ball painted white by me. (It was found in the shed behind my home, and had been painted black.) More family photos - one frame from Dollar Tree, the others were from thrift stores. I painted the center one with an ASCP French Linen watery wash. The silver plate tray was found at a thrift store. 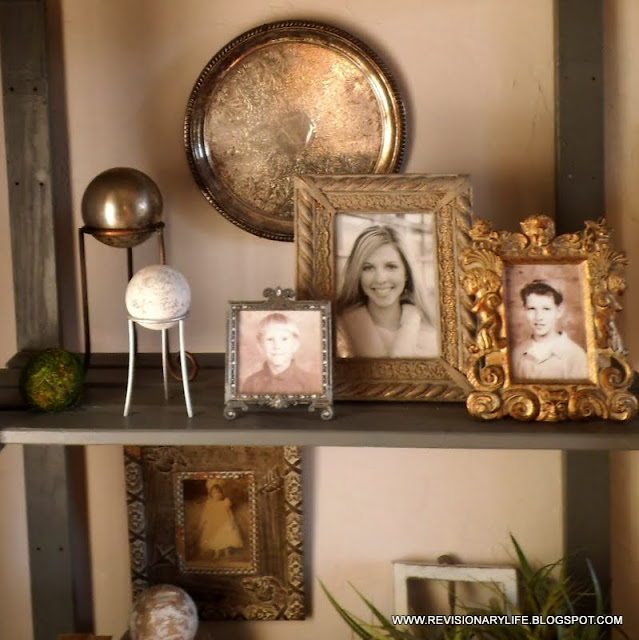 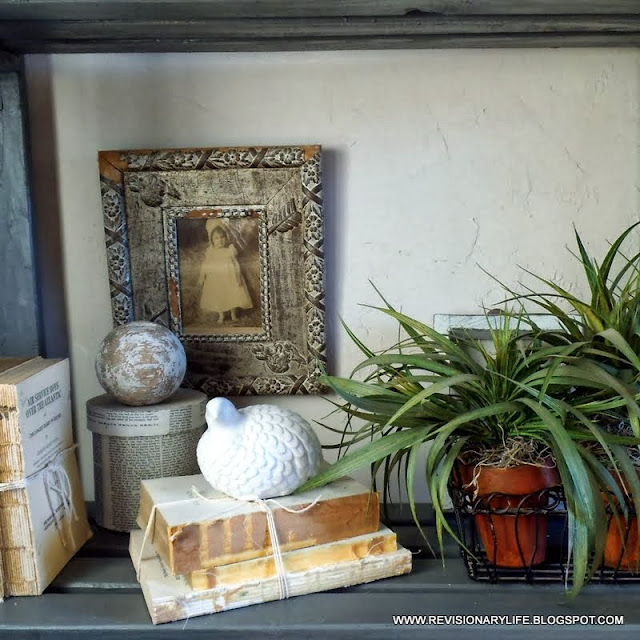 It was nice light yesterday morning, so I just had to take a few minutes to snap some photos. We were supposed to have a rainy weekend. 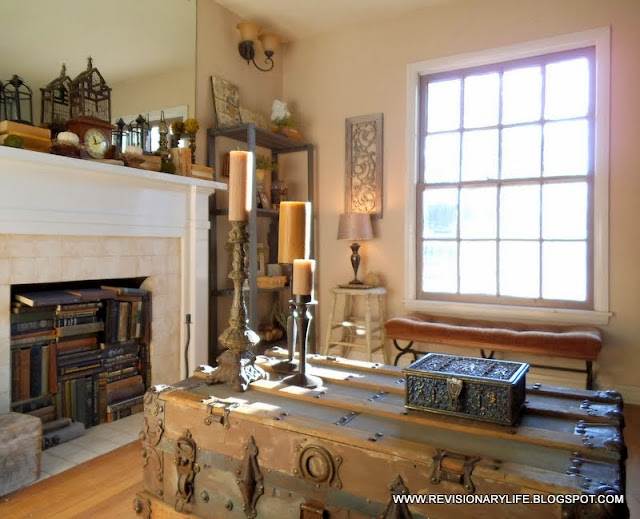 I'll have more to show you of other vignettes in the living room soon!

Word for the Day:
Exodus 25:18
And you shall make two cherubim of gold; of hammered work shall you make them, on the two ends of the mercy seat.

Do you enjoy decorating your mantel as much as I enjoy it?
They're instant gratification...sort of.

I thought it might be fun to look back at a little more than a year of mantel-scaping in my house. Note the number of tweaks I usually take to get it "right!" 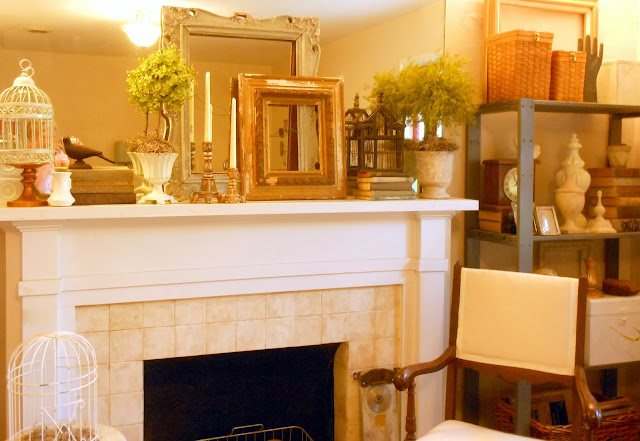 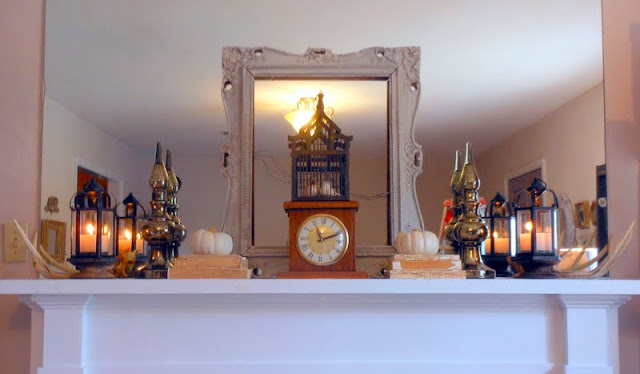 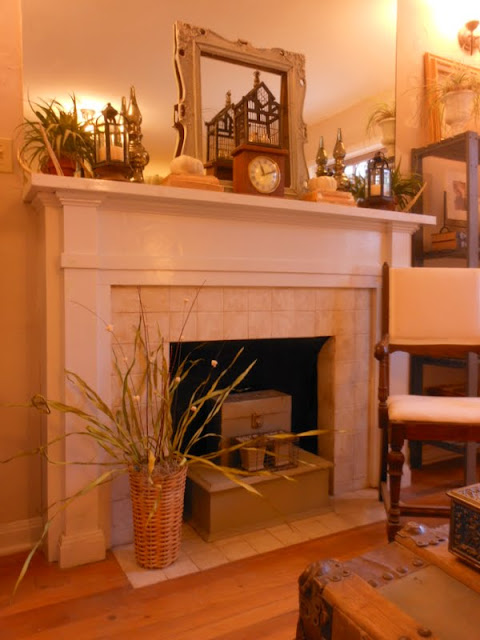 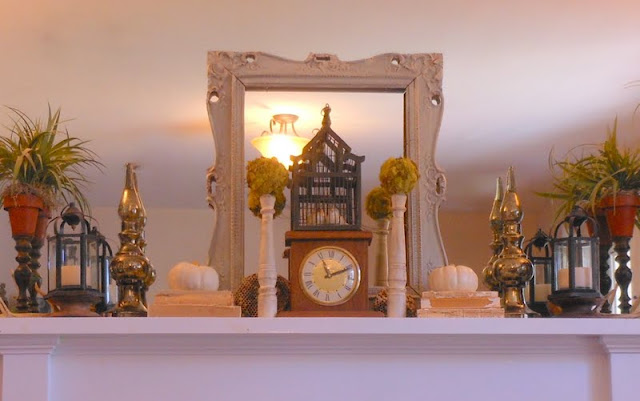 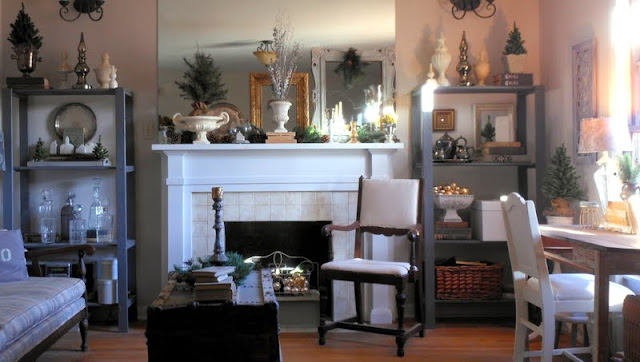 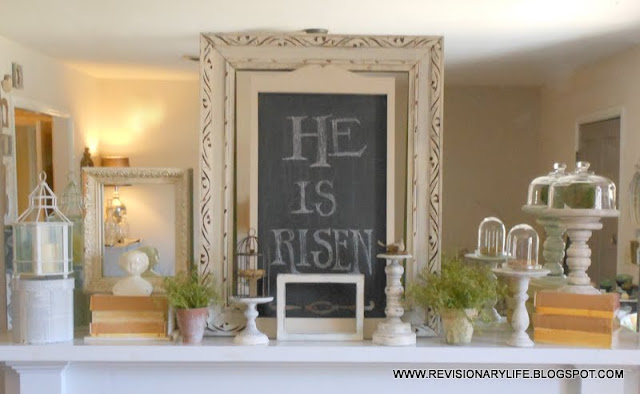 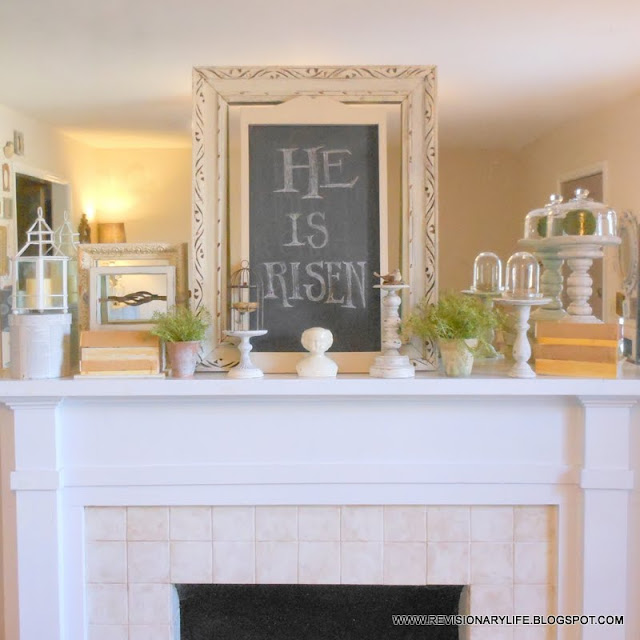 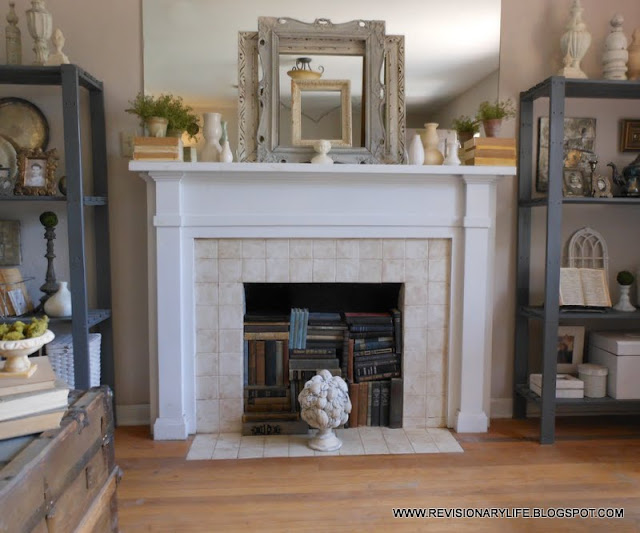 Sorry, I cannot help it. I feel a "take two" coming...
The hearth is the heart of the home!