Curbside Finds, Total Rethink, and Lights at the End of the Tunnel 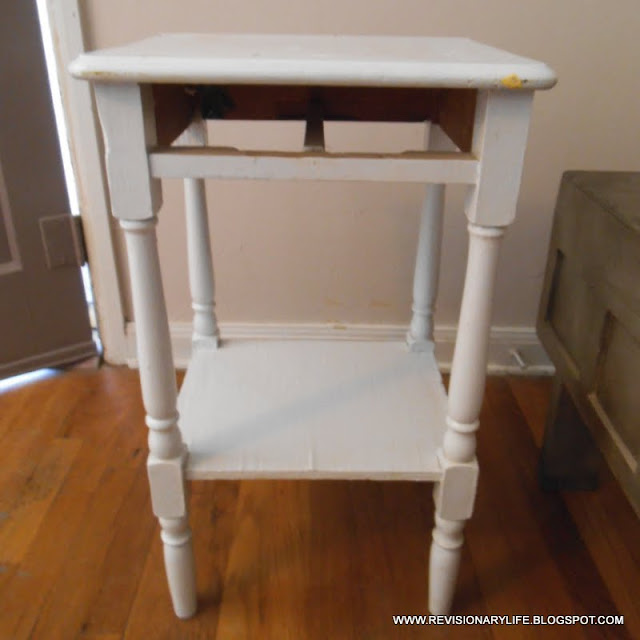 Lately, I've been a bit out of sorts, like this little table.
Not that anything bad has happened, but plans have been tweaked - quite a bit. But first, the table: 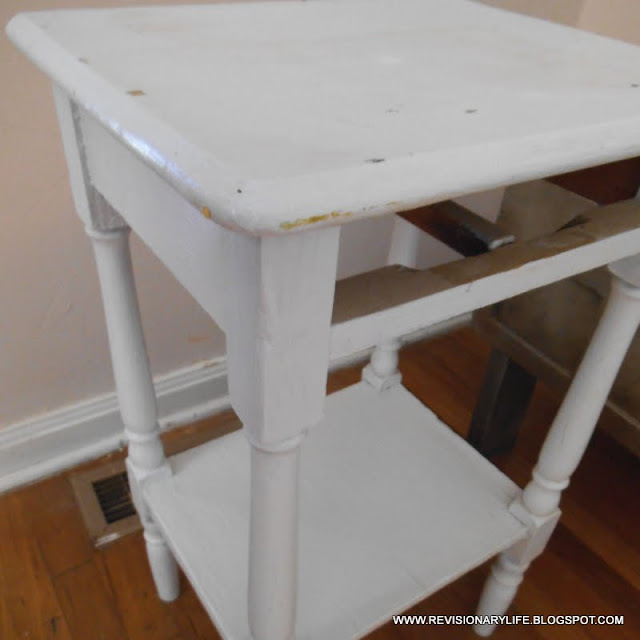 This table was found by the curb decades ago. It has always been missing a drawer. It has also aquired a slight case of wobbly-ness over the years, but hey, so have I.

I have used this table for most of the time I've had it. Usually, it has served as a bedside table, sometimes with a tablecloth covering it's flaws, sometimes with the gaping, drawer-less hole facing a wall so it was not noticeable.

In spite of it's flaws, this table is a great size for a bedside table in a small bedroom. It has nice proportions, plus a little shelf on the bottom for a basket or some reading materials. 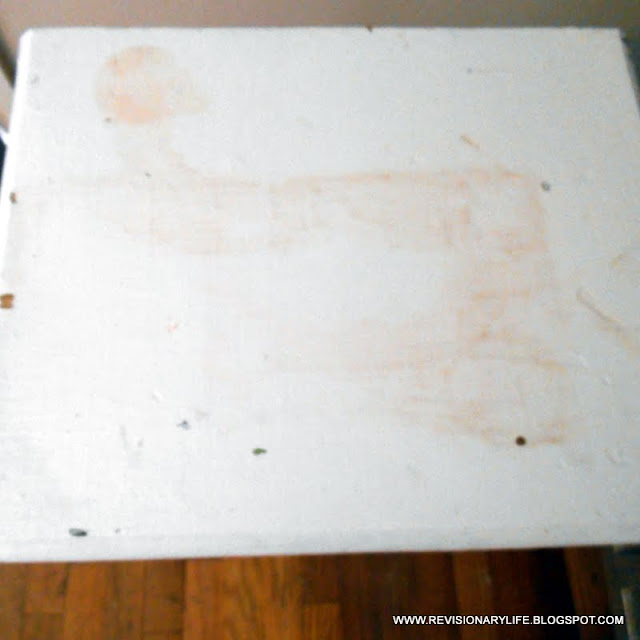 Most recently, it had been in Mason's room/the ex-guest room as the inside bedside table. You know; the one that allows just enough room to walk on the far side of the bed so you can change sheets. I had round cloth with a square scarf over it - two complementary fabrics. When he moved out, and the cloth came off, there was a "mystery stain" in the white paint.

Wiping with a damp cloth or scrubbing with a magic eraser didn't touch it, so I tried a palm sander. 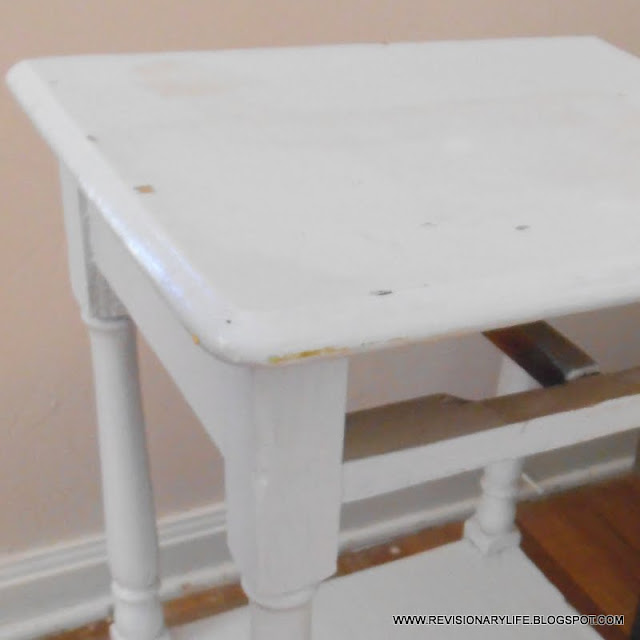 It worked well enough. I think a little dark wax ought to make any residual stain and scuffs look like "character" instead of just more curbside junk.

I have plans to make a fake drawer cover, too. I'll blog about it along with other small projects I'm working on in my new bedroom.

Speaking of my new bedroom - plans have changed. After moving my queen bed in there, it was just too large for the room. I wanted two bedside tables, so I moved the queen bed to the other bedroom. Let me just say: MOVING A QUEEN MATTRESS AND BOX SPRING BY YOURSELF IS NOT FUN. I have now done it twice.

I have a vintage black iron bed from England. It's one of the first pieces of furniture I ever bought - almost 30 years ago. I paid $125.00 for it at a nice antique store in Houston. (It needed paint.) It was a funny tan color when I bought it, so I painted it black. I have seriously considered painting it white recently, but for now, it's staying black. I'll post about it this weekend, after I take some photos, and ask your opinion. 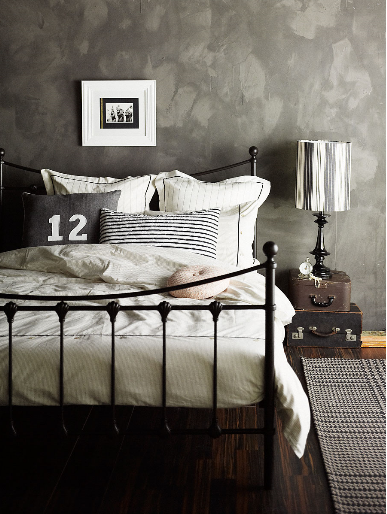 Now, my modern primitive white bedroom with aqua accents has changed to a vintage English bedroom in light neutrals and black. It's ok with me. This room may end up being the guest room anyway, but until I get the other bedroom set up to my satisfaction, I won't know for sure. The walls in this room are a much lighter greige than the example photo. 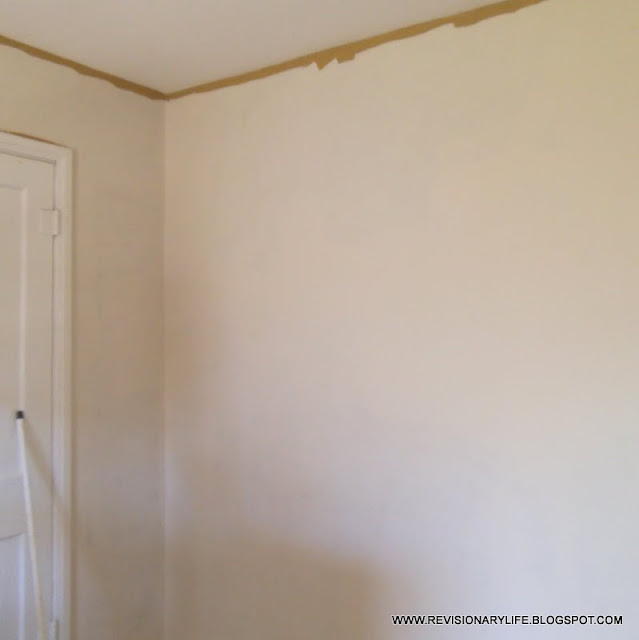 I have also changed my mind about which chest of drawers, side chair, and other items work best for this room. Finally, all the components may be in place, though some if not all of them will need to be painted.

One of the items I'll use is an antique oak chest. It has issues, just like the little curbside table, though it was in great shape when we bought it at an auction 28 years ago.

Those of us who live in semi-arid areas know our furniture from other more humid places can develop cracks and loose joints due to the lack of moisture. I will need to repair this piece and decide whether or not to paint the oak. I'm leaning toward paint, in case you were wondering...

I still have tons to do, but the to do list is getting more fun!
I can finally see a light at the end of the tunnel - at least in this room!

I promise to take photos this weekend and post again.

The people who walked in darkness have seen a great light; those who dwelt in a land of deep darkness, on them has light shone.

Recent Listings and Sales on Etsy... 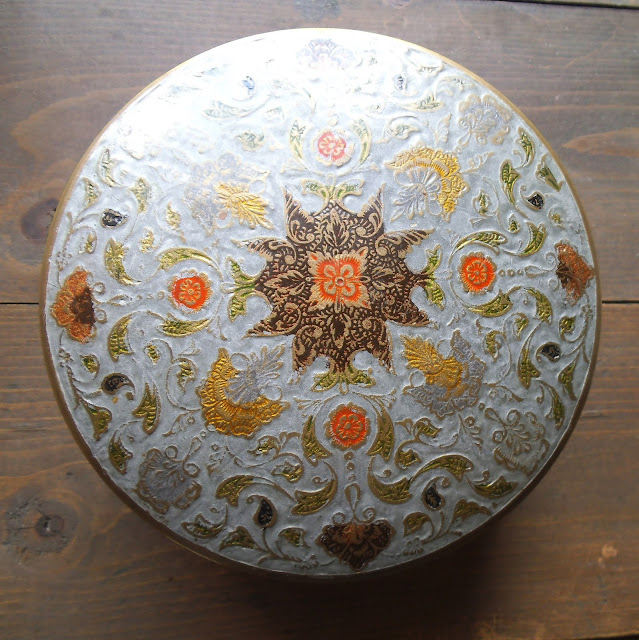 The following items have either been listed or have sold in my Etsy Shop. Some are listed as found, others are upcycled, painted, etc.