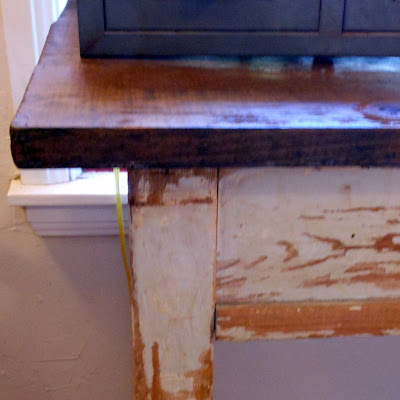 YEARS ago...Probably around 1990...
The year some of you were born...
I was driving down the street in Houston.

Back then, I already had the "eye."
I could spot good junk from a distance.
I saw a pile of stuff in front of a house.
Trash was put out at the curb there. 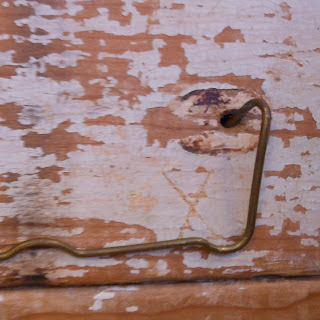 I urged my husband to pull over so I could
grab a couple of interesting things...
He was VERY embarrassed to do it.

Unabashed, I jumped out of the mini van and
grabbed this little chippy white table. 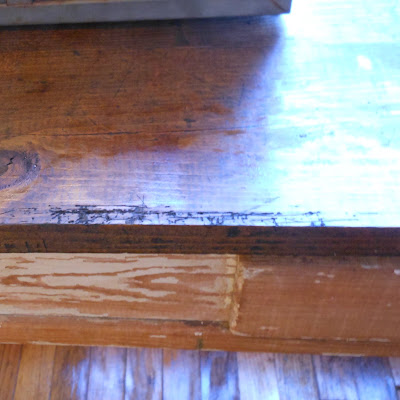 It is one of those tables that had an enamel metal top.
The top was there, too, but it was pretty chipped up.
Back then, chips were not so highly prized as they are now. 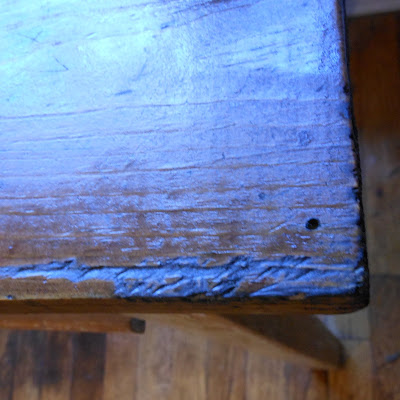 I'd had one of those tables in a furnished apartment at college.
It was in my kitchen between the fridge and the mini gas stove.

I decided to leave the top, but the table went home with me.

I scrubbed the loose stuff off and put a clear finish on it to keep the rest.
I cut planks to fashion a top for it, and called it good.

Though I flirted with black, red, green and gold, this table
was never touched, and there was always a spot for it. 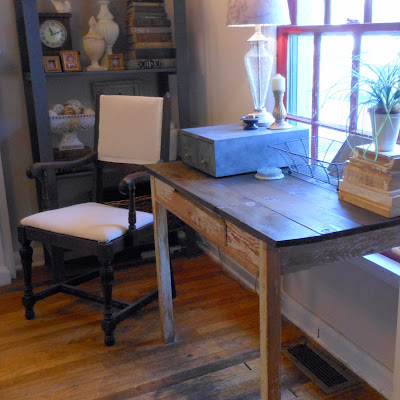 For now, it is standing as a sentinel at my front window.
The window is still red, but may get a new coat of taupe oil paint
this weekend! The new pane of glass and the outside
will have to wait until a certain dog finds a new residence. 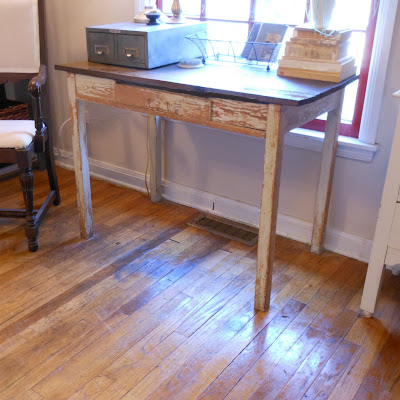 It's just the right size to keep her from jumping up and
trying to attack the post man, and breaking the glass.
Do you think she looks vicious? 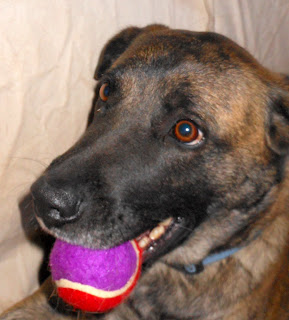 Me neither. But she sure did a number on the front door and window.
She was just doing her job and guarding her home and family.
And that mail man could have been a bad guy. You never know.

And remember the red sofa. It's on its way out to the alley this weekend.
I'm keeping the cushions for her to lounge on.

So the little kitchen table that was tossed out on the curb,
has made its way into my Industrial Elegant Cottage Living Room.
At least for a while...

Since she had a new assignment,
I decided on a mini face lift for the old girl.
Her retrofitted wood top got a new coat of
ebony stain so she would have a darker finish. 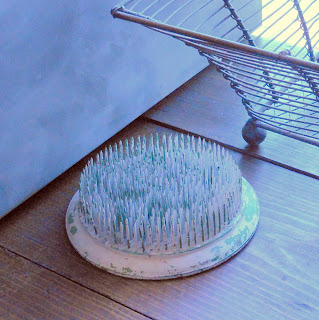 Who would have guessed she had such a checkered past?
Now she's hostess to a variety of characters:
an industrial metal file box, a vintage metal flower frog,
a wire basket, a revised crackled glass lamp, and some vintage books. 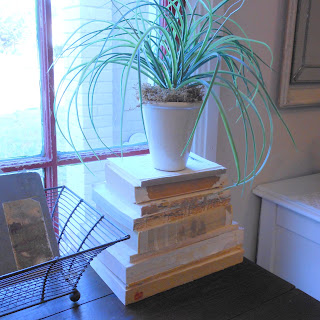 These are particularly interesting ones. Isn't this a great cover? 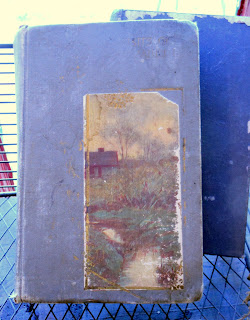 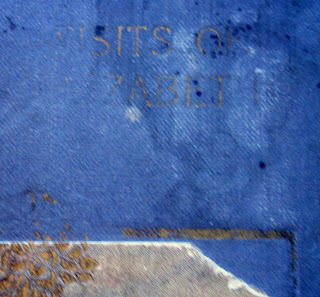 Here's the title and the first page: 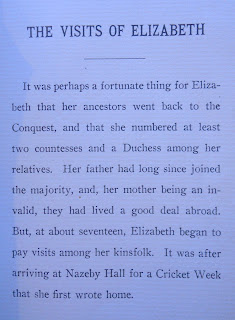 And this is a page from the back: 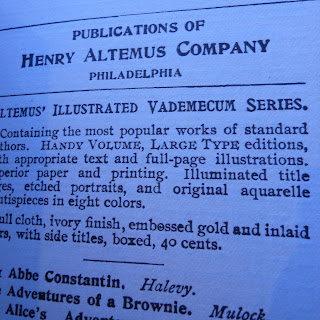 The other book has a lovely embossed seal on it's tattered cover: 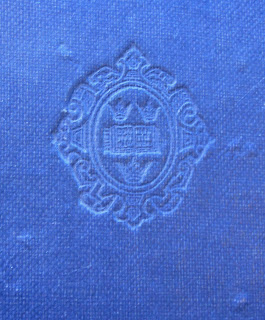 It's a book of poems: 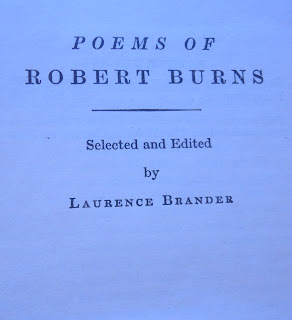 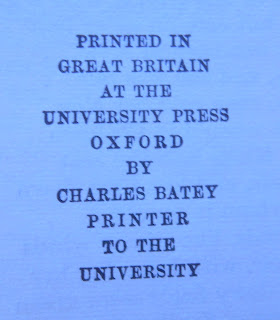 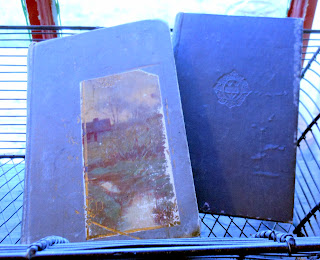 Don't judge a book by it's cover, or a table by it's top.
Or maybe you can after all!


Your beginnings will seem humble,
so prosperous will your future be.

May your future be full with blessings and prosperity from the Lord!
-Revi 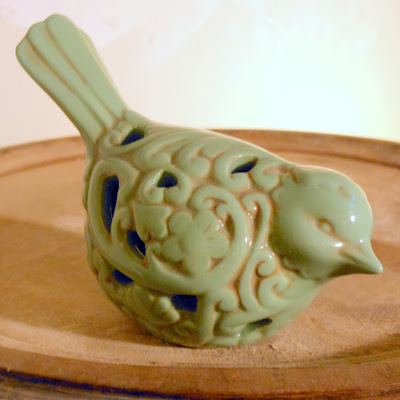 A couple of months back, I found a new, convenient and cheap thrift store.
Last week, I found this little guy and a flock of 4 more of different types - $3 for all.

I like the color if this one.
I didn't show them all,
since only birds of a feather flock together.

At the same shop on a different trip, I found this cute little
milk bottle - half pint sized - for a buck. 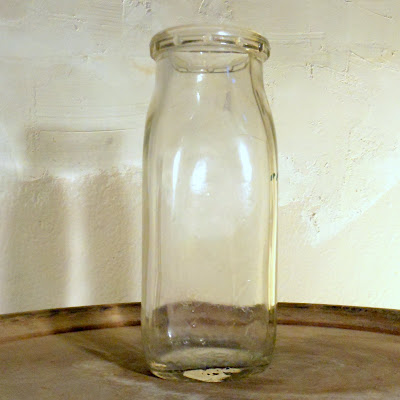 ﻿
Yesterday, I found these lidded baskets with
cool fasteners - $3 for both. I think they'll be painted
either white or gray... 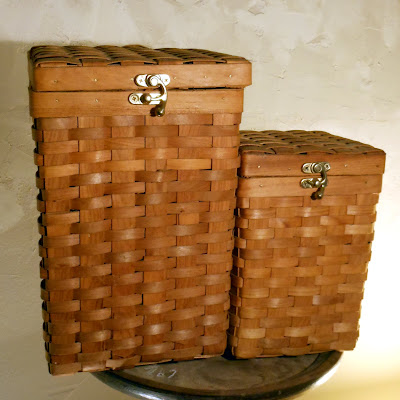 Before I left, I asked how much this little silver frame was.
The little rabbits and ribbons are charming...
The nice man behind the counter said it was a buck. SOLD. 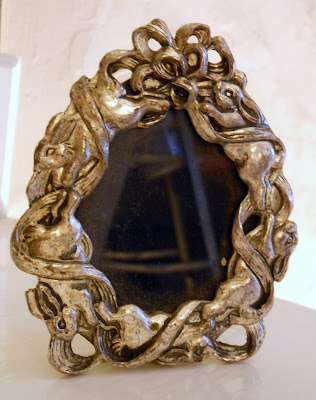 It had writing all around the back of the frame. 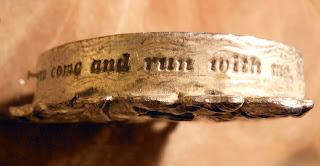 And at the bottom was more -

Genesis 1:21
So God created the great creatures of the sea and
every living and moving thing with which the water teems,
according to their kinds, and every winged bird according to its kind.
And God saw that it was good.

May all your treasure hunting be GOOD!
-Revi