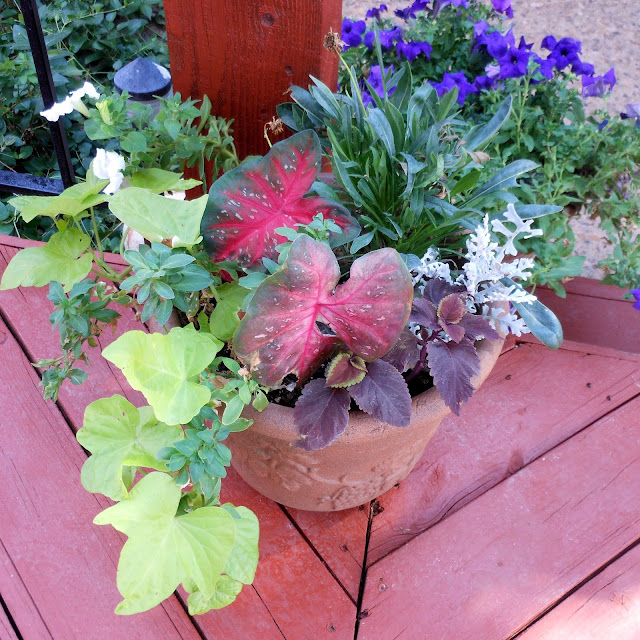 Last April, my friend Derinda told me she was planning to host
a wedding shower for her friend's daughter. She asked my
opinion on what to do to jazz up her deck a bit. 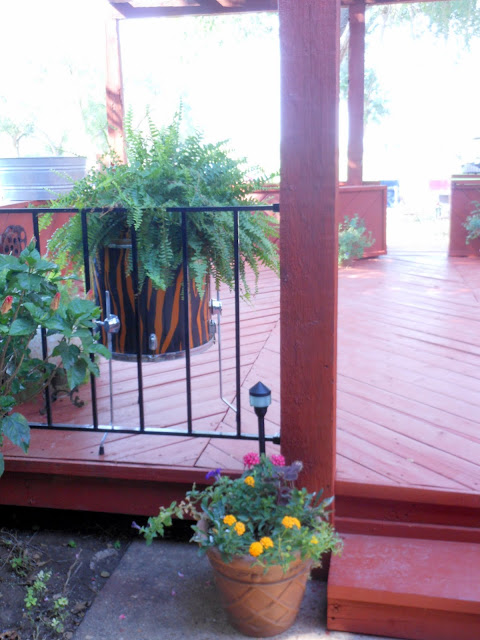 I was flattered that she asked! And I also got excited, since
Derinda has an AMAZING space to work with. She lives
in a lovely Town House on a golf course. AND it has this amazing large
deck with a pergola - overlooking the golf course. 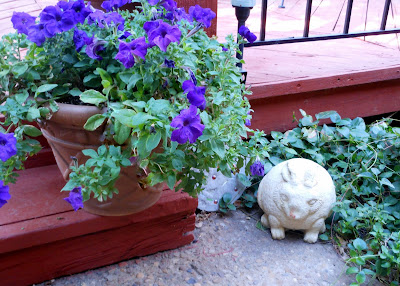 This is a great place for a party! And she already had some lovely
things to work with, so we talked about her vision and I had some ideas
of things we might do to tweak it a bit. So I perused Pinterest and
sent her to a board I pinned with some ideas I thought might work. 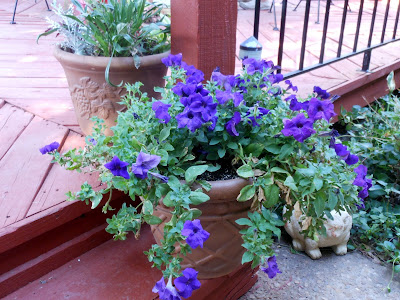 Keeping her existing items in mind, and looking at ways
to cover up those necessary but unattractive things all homes have,
We decides some doors were a good place to begin.
She gave me a couple of hundred dollars, and off I went thrift store shopping!
Anything for a friend, right? (YAY! Shopping with someone else's money...) One feature we wanted to work with is this drum set Derinda had
envisioned as a planter. A few years back, she got this idea for a fun
planter, and found a drum set. (Derinda is one of the few women
owners of an Auto Body Shop, so she has RESOURCES and SKILLS!) 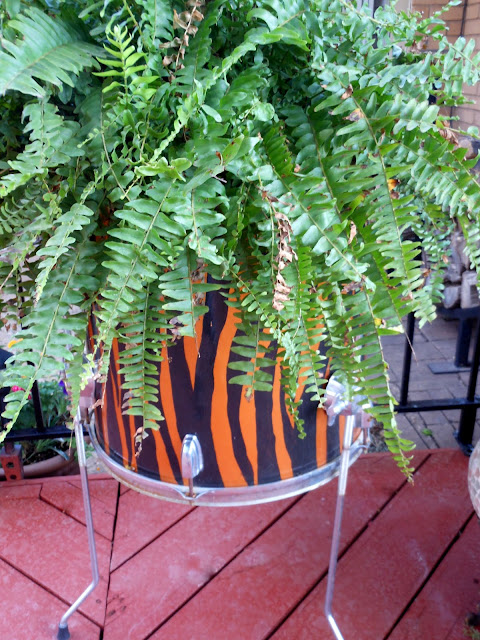 She had the drum set painted with auto paint - so they will never fade or chip.
Then she flew in another creative friend, Cathy, to paint the animal prints on them.
Cathy is an amazing artist - and a perfectionist. JUST the kind of person
you want to do a project like this. So the story goes - Cathy was still tweaking
right up until guests were expected to arrive for a get-together!
Derinda was a tad stressed, but Cathy wanted them just right.
Aren't they fun? They get plenty of attention from the golfers, too.

Though it was not part of our original plan, we all know how one update
leads to A TON of updates. So Derinda gave her railing a new coat of shiny black paint. 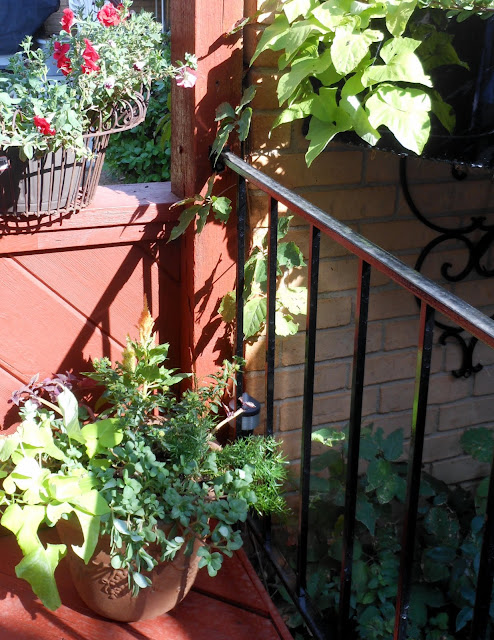 And some of her iron work got a new coat as well. 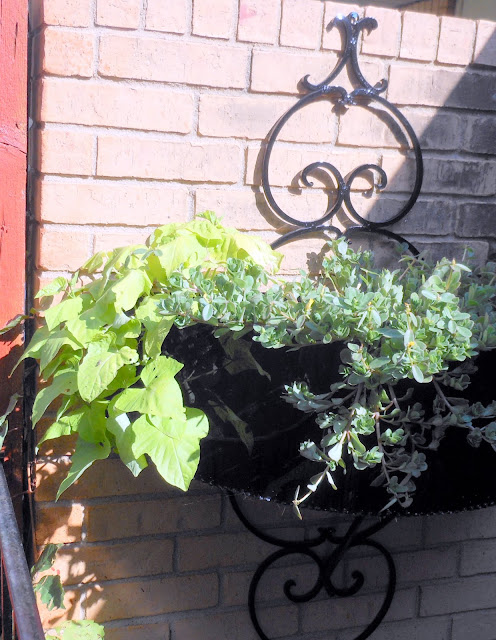 The doors I found on several trips to thrift stores and garage sales
were used to hide utility boxes and wiring - and they look great! 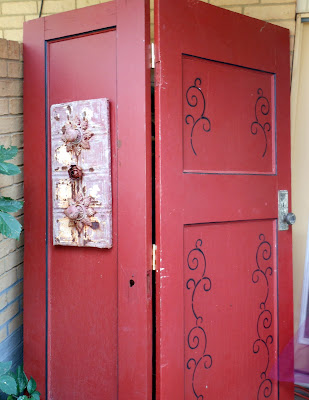 Derinda painted them, and stenciled a wrought iron
design on one. The other is a perfect place for a
piece of artwork she had in her front courtyard!
I love how it works with the hardware on the other door.

She also bought glass bricks and
used pipe cleaners attached to battery-operated white lights
to go inside the bricks for a little twinkle at night. 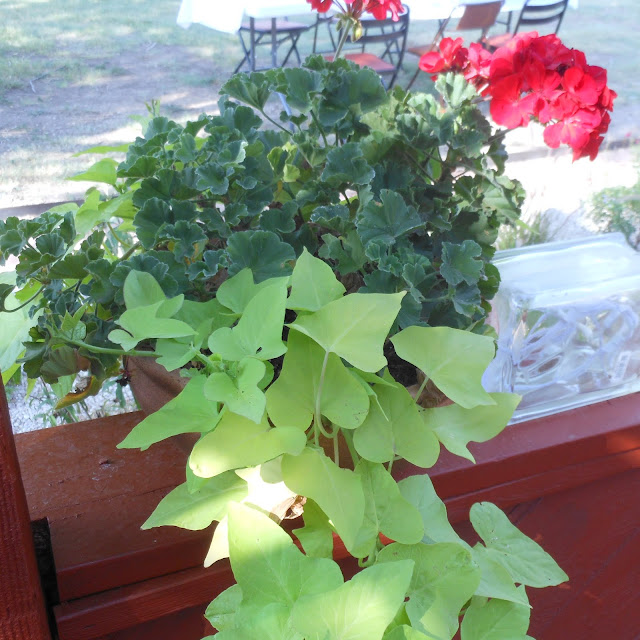 The chartreuse sweet potato vine looks great with her new cushions on her
freshly-painted patio furniture! (Yes, another unplanned project.) 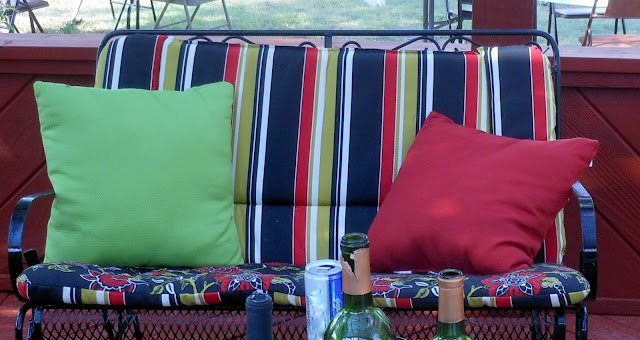 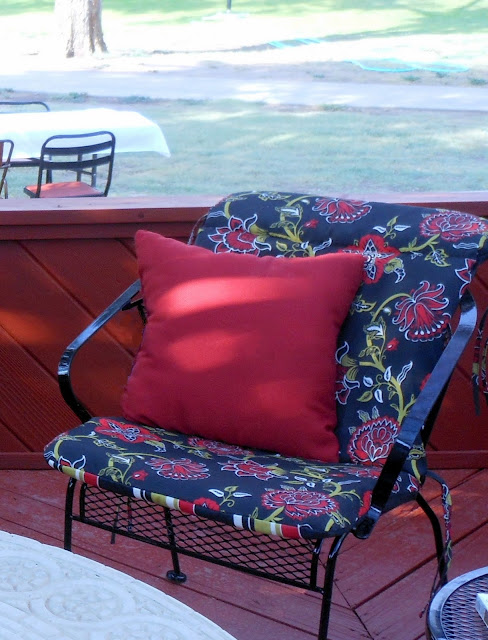 But if you think that's a big project, I should tell you that this amazing woman
PAINTED THE DECK BY HERSELF - IN ONE DAY!

And the party for around 60 friends and friends of friends was a lovely success.
With help from hostesses and family, there was a tasty buffet. 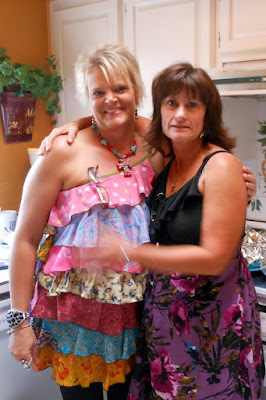 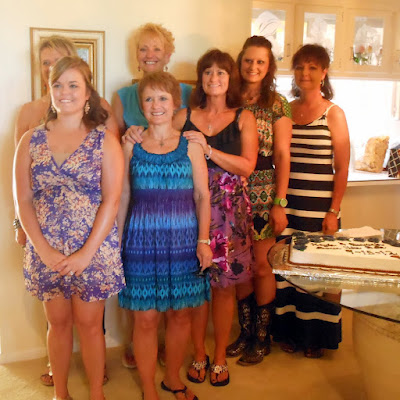 Just outside the back doors, tables were set up for food and drinks. 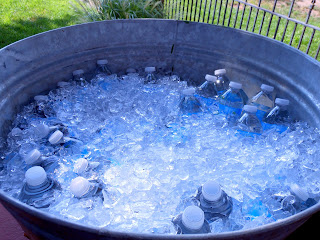 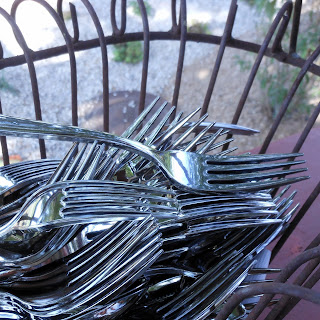 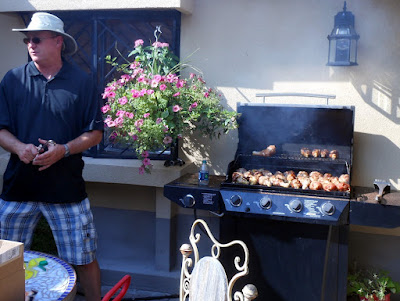 while the future bride and groom (left) supervised, with help from friends. 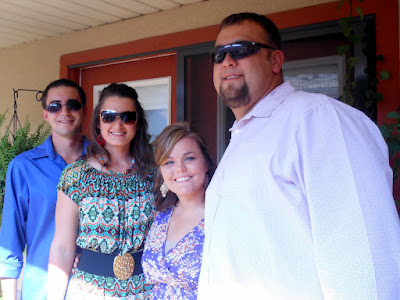 Here's the hostess in front of one of my faves - do you LOVE that door?
Derinda painted it with a spray gun using thinned-down acrylic paints.
Besides being a beautiful focal point as you come out the front door,
it hides a very necessary pump that removes water from the courtyard
in the event of flooding. (Gotta have it, but it's not pretty.)

This HEAVY solid wood door has all the colors found in
her mosaic table, which you can't see, because
it was covered with grilling materials and un-cute things. Sorry.
(You can see a tiny bit of it in the grilling guy photo.) 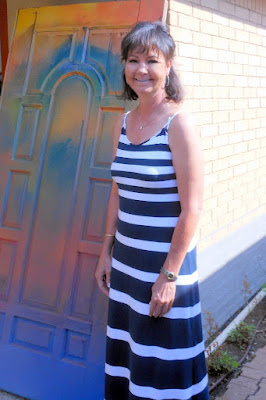 In addition to the photos here, Derinda had her courtyard planted with
xeriscape flowering plants. Another feature not photographed, due to the
abundance of traffic, is the area just beyond the deck on the golf course side,
she created a flagstone path, which surrounds a bed of more xeriscape plants.

It was fun to overhear the guests talking about
what a beautiful place to have a wedding shower. 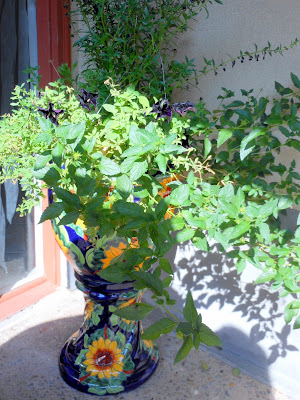 Song of Solomon 2:4
He brought me to the banqueting house,And his banner over me was love.

Just beautiful. Your neighbor asks you because she knows you've got style! I just love the drum set planters that really is too cool! The party must of been a huge success, and you did a wonderful job. So glad you shared your creative inspiration with Sunday's Best!

What a beautiful deck, and looks like it was a great party. Thanks for sharing at Restyled Sundays!

that drum planter is pretty cool! looks like a fun party!

The plants are beautiful! I can never get mine to spill over the side like that. i must not be planting enough plants in one pot? Thanks for sharing. :-)

Graciousness... that's an amazing veranda. My husband jst shoke his head and murmured "I am in trouble!" means I said, great idea.

Have a blissful Monday and a blessed week to come.
/CC from Stockholm

Wow! What a great deck! I love the drums idea, so cute!

I love the drum as planters too way cute! But I am in complete love with how how you organize your blog parties. Love it!!!!!!!

How fun is that use of the drum set?!?

The drum planters are such a blast. Thanks for linking to STL Wednesday!
Mary

the cape on the corner said...

wow! that drum planter is such a neat idea! it looks like a great time was had by all.

Have a Daily Cup of Mrs. Olson said...

Revi, you did a great job giving your friend inspiration for the party. I have a bit of a door fetish so they are my favorite item. The drum planters are so unique. I can see why they get attention from the golfers. Thanks for sharing with Share Your Cup.
hugs,
jann

Just lovely! What a fun time for everyone. I know you enjoyed getting things ready for the special evening.